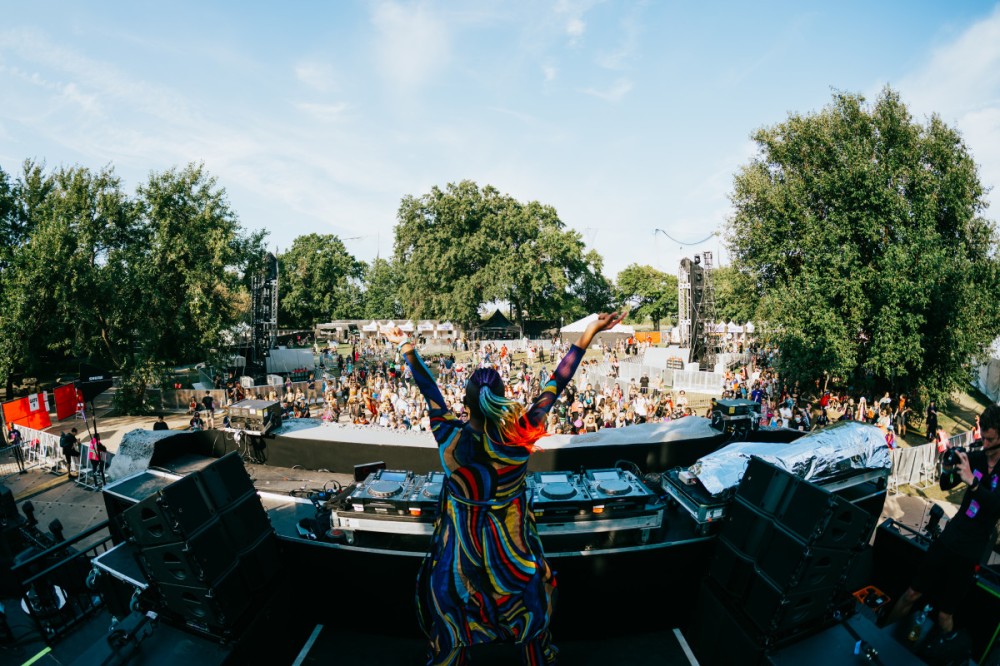 Electric Zoo, New York City’s premiere electronic music festival wrapped its 13th-year last week, bringing out more than 100,000 fans across three days and over 100 international acts. I had the opportunity to sit down with one of those acts, Moore Kismet. If you’re unfamiliar with Moore, that’s about to change as their mindset, focus, and upper echelon creative mind stand alone.

It’s 6 PM on day two of Electric Zoo, just minutes after Moore has wrapped up their set on The Landing stage which also hosted acts like Whipped Cream, Jauz, and Diesel. We’re sitting in their green room, and I open with a simple question - “how did you think your set went?” This is when the magic of Moore Kismet begins, and I quickly get a taste of what makes them so special.

They pause and think before replying “I think my set went as ok as it could go.” This is Moore Kismet. Throughout our conversation, their unwavering honesty, visceral passion, and unwillingness to settle on any aspect of their creative vision came to light. The aura Moore carries was palpable, and I believe they are destined to become a generational talent.

I had just listened to their DJ set thinking it was incredible and highly reflective of their songs – delivering dancing melodies, chaotically clean bass grooves, and progressions perfectly fit for pop music.

For most DJs, it was a set that would have been hard to not be pleased with. Not for Moore, whose seemingly innocent response reveals their harsh inner self-critic and unrelenting focus on their musical execution. Whether it’s the music career, animated TV series, or production company they’re also working on – there is no room for complacency, second place, or celebrating a performance that they felt wasn’t their best.

This self-imposed standard is what’s taken the 17-year-old Moore Kismet to concert halls and festival stages all around the world, well before they’re a legal adult.

It goes deeper. This isn’t the story of a teenager who is applying the same success recipes as those before them. This is Moore Kismet, who has taken the electronic music world by storm over the last two years with sound design, creative vision, and musical idea execution ability that is very hard to come across. It is this essence of theirs that compels me to believe how much they’ll shape the future of not just electronic music, but music as a whole and what it means to be an artist in 2022 and beyond.

This is not an easy path or one of manifest destiny. Moore is black and trans and has struggled to balance everyday life, growing up, being a teenager, and the deep challenges that come with musical success. At times, the day-to-day as well as feeling misrepresented has become so difficult, that just a few weeks ago, they tweeted about potentially ending the project outright. But what keeps them going is feeling properly supported, understood, and garnering the respect they feel they’re worth for where they are in their career.

“The support from the queer community, it’s been so wonderful to hear from other queer people, especially queer people in music, who have such unbridled faith in Moore Kismet and in me as a creative, to continue putting on our community.” - Moore Kismet

While Moore and I had just met for our interview, it quickly turned conversational as Kismet’s real-life personality is reflected in their music - they are risk-taking, unrelenting, honest, clear, clean, and carry contagious energy. Their age is commonly referenced as it correlates to their achievements relative to age, but Moore really just wants to be asked about how they’re doing, how life is going, - just don’t call them a bass music artist.

“I want to be in my own lane, and sometimes I feel like I’m not really doing all that good of a job of it if people keep labeling me as a dubstep artist, or as a bass music artist. I am an electronic artist. Call me what I am, and respect my music as such. Because otherwise, I am going to be in a position where I’m not going to want to put shit out anymore.” - Moore Kismet

Their music, while heavy in nature on some songs, dances in a realm beyond standard heavy electronic music. Moore’s take on electronic music, which can be heard in their recent album UNIVERSE, can’t be pigeonholed into a genre label. In a musical world where artists are commonly categorized as “genre-blending” to try to set them apart, Moore Kismet is a genre.

Their sound is unique, reminding me of trend-shaping artists over the years like Skrillex, Kaytranda, and now Fred Again, whose sounds transcend fleeting musical trends and introduce musical tropes that have and will become staples for years.

Electric Zoo, New York City’s premiere electronic music festival, brings the best of the best. From sets like G Jones and Eprom who push the limits of sound design beyond belief to headlining sets ripping from one genre to the next in DJ Snake, to some of house music’s catchiest and creative basslines in Chris Lake - Moore Kismet’s set stood alone. Their creative artistry stands alone. I couldn’t help but think throughout Moore’s set that this was a set that deserved the main stage with pyrotechnics and a proper light show. And next year, I hope to see Moore where they deserve to be - in the limelight for dance music fans new and experienced to witness their creative explosion in the medium in which it deserves - a mainstage.

“I want to give mainstage energy so people can see me now, and regret putting me in the afternoon, and book me later. That’s my thing. I want to show people that I’m worth giving that 11-12, midnight slot. I’m worth C02 and pyro, I’m worth the visuals, I’m worth bringing out gigantic pop stars to perform collaborations on stage with me. I am worth all that stuff. And I continue to make music that shows that I’m worth that.” - Moore Kismet

Electric Zoo was the home to one of the most refreshing and compelling music conversations I’ve had in quite some time. And Moore Kismet is ready to have their conversation with you - through their music, performances, eventual animated series, production company, and more.

Music fans around the world need to hear and take on what one of the most unapologetic, honest, and well-intentioned artists we have, has to say. Check out Moore Kismet’s music and merch on their website. Maybe one day, we’ll be able to hear their dream collaboration of Beyonce, Megan Thee Stallion, Adele, and Halsey.