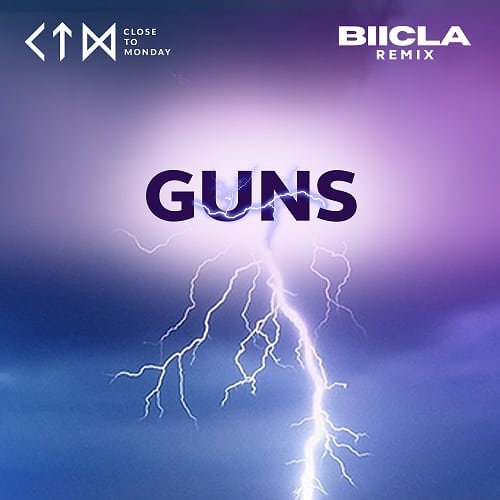 Emerging European Electronic Music band “Close To Monday” has been breezing through career milestones at breakneck speed since their inception as a collective in 2020. Immediately after the release of the band's brand new album in April 2021, the track “Guns” music video became the winner in the category Best Dance Music Video at international festivals in London and Rome!

And now “Close to Monday” presents the remix of the track “Guns” performed by a bright Russian DJ and multi- instrumentalist Biicla, who has already noted great collaborations with Emmit Fenn, Louis the Child, Zead Deads! The remix is available on all streaming platforms from October 15 – https://linktr.ee/closetomonday

Biicla colored the “Close to Monday”s track “Guns” with his signature sound that combines the hard-hitting elements of future bass with grungy synths, hip-hop grooves, and experimental nuances. His look is a refreshing take on the original theme of the track, which leads to a decidedly alternative listening experience. And this amazing track transformation is not accidental. Biicla has established himself in the music industry as an original producer creating uniquely-styled tracks combining unusual blends of electronics, vintage samples and live vocals.

Not by chance, his debut immediately received critical praise from the industry taste-makers like Billboard. For “Close to Monday”, this remix has become a wonderful continuation of a series of collaborations with bright representatives of the electronic music scene, being a confirmation of the interest in the band's music from the industry fellows. The alliance with the famous German producer Ron Flatter in the middle of summer has resulted in the release of the band's first remix.

And in early autumn, “Close to Monday” released an incendiary remix of the track “Time” performed by the established techno and house master Dirty Doering. “At some point, it seemed to us that everything happening in the world is terribly oppressive. There are so many deaths and so much injustice.

It felt as if we needed God’s hand, but that of a tough God who would come and put an end to the evil. “Guns” track is the feeling of anticipation of a righteous and tough hand” – Close To Monday

ABOUT “CLOSE TO MONDAY” – In 2021, the band released a brand new album “Interference”, which is subsequently holding a second place position in the German Alternative Charts (being in the TOP 10 for eight consecutive weeks); standing as the only representative of independent music across the full chart. Another of the album’s shining successes was the track ‘Step By Step’ which made it to #1 in both the LRDR Radio (France) and Klangwald Radio (Germany) charts.

ABOUT BIICLA – Biicla is a Russian multi instrumentalist, singer-songwriter and producer. He is from an extremely small town in Russia called Labytnangi (born in Dubna), which population is less than 30,000. He’s had success in Russia and has recently began to make waves in the US with his unique and irresistibly catchy international brand of future bass mixed with house music influences.