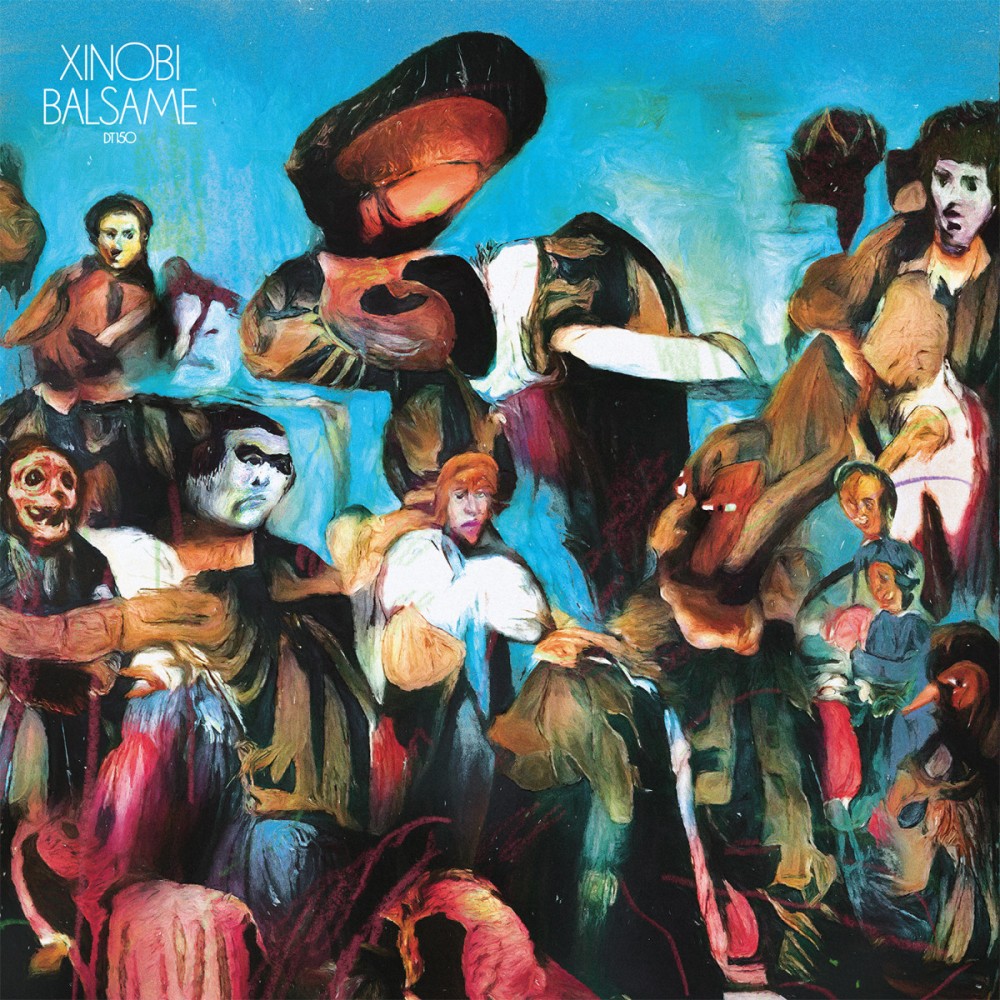 On April 8th, Xinobi released his third album, Balsame, the long-awaited follow-up to the acclaimed On The Quiet. Balsame is an expansive labor of love preceded by the single, ‘La Tormenta’, which not only opens the album but introduces the first of a host of guest collaborators crossing both musical and geographical boundaries in the process.

Coming off the back of an immensely productive year in 2021, that included Xinobi revisiting the aforementioned ‘On the Quiet’ by re-releasing it as an expanded version, as well as seeing him re-collaborating with Portuguese Fado singer Gisela João, their first joint outing since their much-lauded crossover single ‘Fado Para Esta Noite’ and adding to his remix roster with remixes for other eclectic artists such as Luca Musto, Omri Guetta & Omer Tayar. He also found time to release lots of his own new music with an EP, ‘Morangos’, on Frau Blau and topped the year off with his latest single ‘Helium’. He was prolific, to say the least. Since then, he has been in the studio, at the new Discotexas headquarters in Lisbon, applying the finishing touches to Balsame.

I was doing another track with Meta_, the singer of “La Tormenta”. We were working long distance since it was lockdown times. I sent her an instrumental and she got back with so many great ideas that I felt it would be better to split them into 2 songs. Contrary to the original track she was doing vocals - “Mujer” (that I’ll talk about later) where she sang over an existing instrumental, here I built the instrumental part around the pre-recorded voice, an exercise that felt really similar to doing a remix. So I just toyed around and build the song, recorded guitars, basses, synths, etc in my kitchen - at that time my temporary studio -, and asked for Meta_ to record a few more details - like the whispered vocals that are, surprisingly, the chorus. Some months later we’ve had to chance to be in a proper studio together and re-recorded the vocals with a really good microphone and a proper threaded recording room. It was the last song to be written for the album and its first single.

‘La Tormenta’ is about the strength and power of women, who always end up emerging from the darkness. It gets this message across with spiritual references like the moon, sacred fires, and the tempest (giving name to the track) in which she is the survivor.

I composed most of the instrumental in late 2019. In December of that year I played in the south of Turkey and met this amazing artist Alem-I Adastra and immediately thought the instrumental and her voice should get married.

This track was also made long-distance between Lisbon and Istanbul. And funnily it became summer a hit in the Turkey region of Çesme even before its final version was made. Alem-I Adastra played it over and over in the beach clubs of that area for the pleasure of those who got addicted to the “Basa Bela” hook.

It’s a haunting and trippy song about being in love. Simple like that.

I invited my friend Margarida Encarnação to sing on this one. She’s the Elsa voice in the Portuguese version of the Disney movie Frozen, so It’s no surprise she can go more cinematic, and operatic but she also added a Fado touch to the song with the vocal hook on the second part of the track. “Amor Cego” is a track about loving blindly regardless of any danger that that love can bring, or desiring something so much that you’re willing to risk it all just for a glance. Here it’s cleverly dressed up in metaphor, by the sun, that can blind you by looking directly into it. But you can only see the sunlight at its maximum power, risking yourself going blind. The track couldn't be more brooding, nocturnal, and dark, almost representing itself to be something that could totally eclipse the sun. Horns were first played on a keyboard, but later I was lucky enough to have Justin Stanton of the almighty Snarky Puppy recording trumpets. It was the first record session even in my new studio. It was recorded at the peak of the cold Lisbon winter and the studio didn’t have doors or windows at that moment. So we were all dressed like we would go escalate the Everest recording trumpets. It was the coldest studio session ever. I don’t think I will ever do another one like that. If that microphone could record the temperature, you would definitely listen to the sound of ice.

The voice in Phénix is bold! Arâm delivered a hugely emotional performance of her poem “Phénix”. I’ve listened to this track hundreds of times and I still get goosebumps when the voice comes in, so urgent, so strong. And when the chorus comes in the emotion grows and it feels almost like a punk rock anthem inviting us to reclaim the streets. That is why this track is so immediate. It grabs you with strength and says “Pay attention please. I have something to say. We have to go out and give voice to ourselves” And somehow it glues beautifully with the “emotional” trumpets lines I made. I’m really happy about this track. The bass was recorded by my friend Vasco Cabeçadas in the minute. No overthinking at all. It was pretty much a take only. But that take has all the strength this needed to guarantee that the lyrics about revolution and about building a new and better world would have the necessary impact. It became one of my favourite tracks of the record and probably the one that was harder to finish as I wanted it to be as perfect as possible.

I love movie soundtracks. And I love my music to be somehow cinematic. With slow-motion, I actually tried not to be cinematic only, but to sound like a proper original soundtrack. The first version had like 10 or more minutes, but the length was mainly for my personal pleasure only, so I made a shorter version that I consider to be almost perfect. Trumpets are again courtesy of Justin Stanton. What a honour having such a talented guy playing on my record.

Looking back, knowing I wrote this song in like a day, I think I was under a very inspired moment of my life, even if in a kitchen doing music with a pandemic out in the streets.

This is the song I mentioned when I talked about the album opener “La Tormenta”. All the vocals were made for this one, but I felt there was more than one song in all the recordings Meta_ sent me. The stories behind both tracks are basically the same and both songs speak about women's struggles and how precious women are. They are our grandmothers, mothers, wives, sisters, and daughters.

I was building a downtempo track. A really slow one, and somehow felt it was lacking any type of energy - even for a slow song. So it just occurred to me: why not double the tempo and take it to a more drum and bass area but keep the atmospheric and cinematic vibe I was initially idealising for the track. In my opinion, it got beautiful and it probably feels a little bit surprising to have a drum and bass track in this record. At some point, I was thinking if it wasn’t totally out of place, but the more and more I listened the more sense it made. It should belong to this record, especially when Arâm added superb vocals about how life can go on even if we kill ourselves with our stupid guns and with our greedy and war-oriented civilisations vices. Life will last, not necessarily with us humans. A great message.

The first track recorded for the album. It was the genesis and inspiration for everything. Âram nailed it again and made the track sounds so urgent. So punk. A track about healing using the metaphor of the wine as a healer. Although here the wine represents a quick fix for the erratic person/creature Âram is giving voice to, it should represent a bigger objective: Healing permanently or at least fighting for stronger solutions.

I made the instrumental very enigmatic because it was the perfect way to give space for the character Âram would later introduce.

It was the first time I recorded a Turkish Baglama. To be honest I’ve never learned hot to properly play it. But we can do music with any instrument even if we’re not good at them.

With this track, I tried to illustrate with sound a potential scenario where all the singers of the record would gather and plan a revolution. I can picture a chaotic mix of a forest with urban elements, old graffitied buildings; smoke and fog; weird creatures walking randomly and drunk, and a few people aiming for revolutionary days. Everything is very oil-on-canvas “painted by Goya” style. These were also some of the ideas I gave to the genius designer Bráulio Amado for him to do an album cover. And he nailed it 200%. Ironically The Gathering is his less favourite track of the record. He was not super convinced with the mix of techno with rough organic sounding melodies. One thing that it’s worth noting is that I bought a (very cheap) Melodica just to record this song. I’ve never used it again. But I should, as it is a fascinating simple musical instrument.

As I said before, I temped a studio in my kitchen. This track started as me testing my guitar through a not-so-good sound card. Eventually, it developed into an epic post-rock / post-electronica song, with a lot of pianos. It’s laughable to think that such an epic-sounding track was made in a kitchen. I would be much more comfortable producing it laying on the sofa with my laptop and headphones, but I would easily get distracted by television and all the Covid related news. In the kitchen, I would only pause my work to cook. In the end. At some point, I looked at this track as the album opener, so it’s kind of ironic it ended up being the album finale.