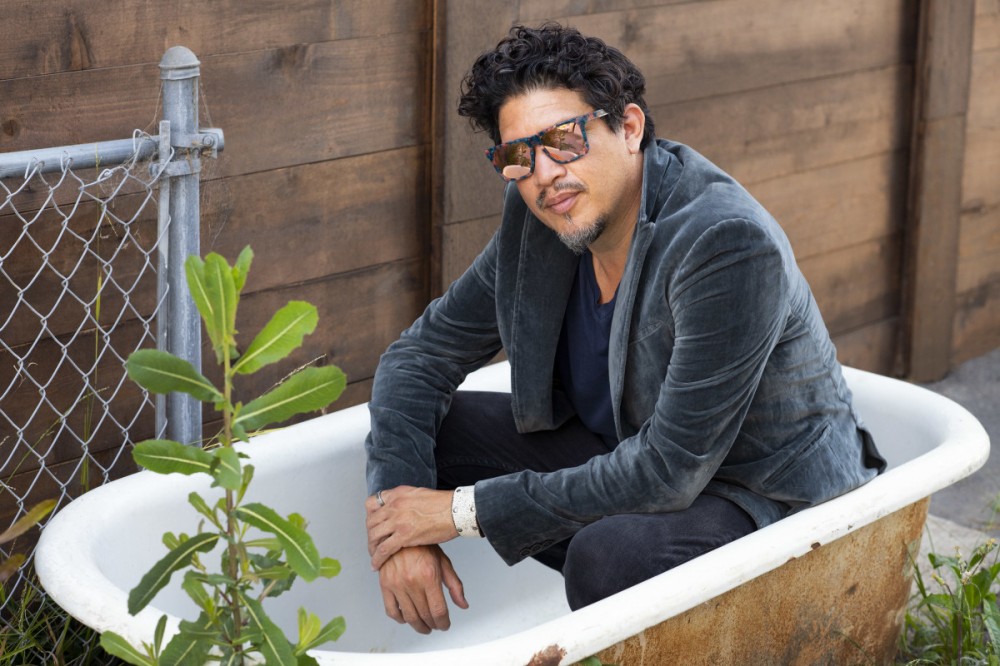 This Friday has a remarkable amount of great music out. Rob Garza of the Thievery Corporation is another one providing the goods today with his new album Daydream Accelerator. The album comes under his project GARZA, which takes a little bit of a different approach to what people might expect from his tracks.

The title Daydream Accelerator is spot on as this feels like a daydream at times. It brings in elements of indie pop, new wave, synthwave and 80’s and 90’s rock with modern production. Almost all of the different songs have vocal contributions, which gives many of them a larger than life feeling. Daydream Accelerator varies sonically quite frequently with some reggae on “Talkin” and the combination of euphoric synths and rock guitar on “Letting Go” that still somehow works.

Since this project was a bit different, we wanted to get the lowdown on how it came together. In a new Director’s Cut, Garza breaks down the album, track-by-track, explaining how collaborations came to be with other producers and singers. Some of the tracks were demos for other artists he helped reimagine and most of it was made during the pandemic. Pick up your copy of Daydream Accelerator now and read along as you listen.

“Daydream Accelerator was written mainly during the pandemic and is a fusion of many different influences from when I was growing up in the 80's and 90's. Mainly experimenting with pop and new wave influences mixing them with modern production. This album was a collaborative effort working with different young singers, songwriters and producers. The theme is of a dissociative multi-genre series of musical visions that flow and mix together like daydreams.

1. Summer is Ours feat. Enemy Planes

“Summer Is Ours” was written during the height of the pandemic with featured artist Enemy Planes. The track was born from imagining what life would be like were it a “normal” summer, longing for a sense of liberation. It has an anthemic 90’s rock vibe interlaced with ambient electronic textures and soaring vocals from Enemy Planes vocalist Yësac.

“Can’t Kill Me” employs a synth pop modality while featuring the talented vocalist Calica and tech house wizards Walker & Royce. This track started as a sketch in Madrid, Spain and was later joined by Calica on vocals / lyrics and was ultimately topped off with a dash of production work by Walker & Royce. The undeniable eighties flashback feel is amplified with a hefty dose of modern vibes.

“The Future Comes Too Late” sounds like it could be the theme song for a yet to be released James Bond film. The title was inspired by recognizing the human tendency to believe that we know what the future should be, while acknowledging the reality that more often than not things turn out far different than we planned. This was co-written with Seann Bowe and sung by Emeline with a touch of Portishead vibes.

“We Want” is originally a song written and recorded by Enemy Planes. I came across the track when Yësac, the vocalist and songwriter for Enemy Planes was gearing up to tour with the GARZA project. I fell in love with the original and thought it would be fun to do an electronic re-imagining. I really dig the sort of goth electronic vibe that this track exudes, it’s somehow brooding and strangely anthemic all at once.

After touring and recording with Racquel Jones for years in Thievery, I wanted to make something slightly more modern. "Talkin" was a fun track to create with its pounding electronic rhythm and fiery vocals, making it a rather unique offering in the overall context of this album.

“Way Out” is a swirly tripped out soundscape again featuring Enemy Planes on the lead vocals with background vocals from Magnetic Moon recording artist ToBy. The track explores the frailty of human existence and coming to terms with the beauty to be found therein.

“Swim To Shore” was written with collaborator Fare who sang on a previously released Garza track called "Dissolve." This is another tune born out of the depths of lockdown with Fare lending his emotive vocals to round out the track, touching on themes of isolation and a yearning to reconnect.

“Letting Go” is the second collaboration with Dublin soul vocalist Stee Downes. This track has a decidedly 80’s pop electronic vibe inspired by the likes of Human League’s "Don’t You Want Me." The prevalence of synthesizers during the 80s was a predominant influence in the making of this album.

This features young up and coming artist EMELINE along with San Francisco-based conductor and string arranger Mason Bates and Mercury Soul. This track features lush strings accompanied by subtle hints of sitar. The idea for "Something That’s Different" was inspired by the notion of rebirth and moving beyond the trappings of nostalgia.