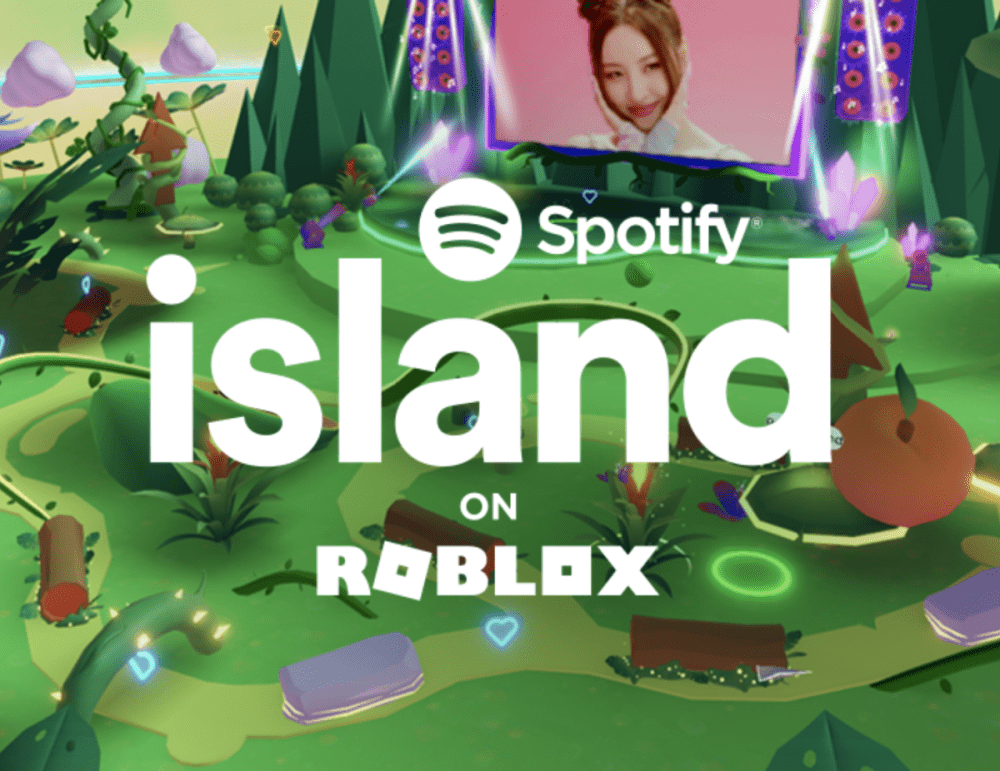 Two of their recently announced business strategies show they have Web3 innovation and diversification in mind.

The first of these strategies includes Spotify Island, which merges the number one music streaming service with one of the most popular gaming and metaverse platforms with Gen Z, Roblox. From early news, the approach looks to be as much social-fan-hub as gamification of artist branding and content. From the "main" Island, users will portal to theme-based experiences promising interaction with the artists, mini-quest/games, and access to exclusive content.

The first theme island, slated for launch in late spring is K-Park, a place for "all things K-Pop".

In-game virtual merchandise is also teased as a part of the new ecosystem. For example, users can explore an "audio oasis" to gather "Like" icons and then use them to collect/trade in metaverse goodies. Moving forward, individual artists, labels, and specific releases should begin to populate the virtual archipelago.

With the promised integration of Spotify's Soundtrap, an online Digital Audio Workstation that we'll discuss in a few minutes, I do not see why a Web3 DAW could not be used within the virtual world to create licensed remixes/NFTs of theme artist's content. In the context of the Roblox gaming environment, it could be collaborative, contest/prize-based, and be traded/sold from a Roblox compatible marketplace, or one of Spotify's own creation.

The second of these newly announced business strategies is that Spotify artists' NFT collections will now be accessed via the Android App, with a pass-through from their Profile Page to the OpenSea NFT marketplace.

The execution parallels the collaboration between sound.xyz and OpenSea. Currently, access is available for only a few artists. In initial reporting from Music Ally, some subscriber responses resemble the gaming community reaction to the Epic Games LOOT NFT marketplace (not so receptive).

Many top-tier artists are both cofounding and "staking-in" new NFT music exchanges with varying revenue sharing models. NFTs can be controversial and with the use of this OpenSea trial, Spotify can gauge user response before fully integrating an NFT marketplace - whether it remains as a collaboration, or they make a move into that space.

Spotify acquired web-based DAW Soundtrap in 2017. With some creative implementation, its functions can become a Web3 content creation tool.

I use the term "game changer" from the perspective of a metaverse-based digital audio workstation (DAW) that is tied into your Spotify/Roblox account and used to create, save and tokenize new media content. For example, you buy a pass that allows access to stems and/or unique samples from a theme or featured artist.

At that point, there is no reason controlling audio can't be done using new interfaces compatible with the Roblox "VR World". Why not a DJ deck or spatial objects that can control the volume and position of samples, along with the other workings of Soundtrap?

As you use the DAW interface, all the samples and length of time used, custom mix choices like automation and effects processing can be stored. Essentially, you have a saved Soundtrap project that could be repackaged as a metadata and could be used to playback your creation within Spotify Island - by you, or other authorized users.

Attach this metadata to a token and you have an NFT!

Royalty tracking can be handled if the metadata for the music created this way is encapsulated within the virtual world. Of course, access would be through Spotify Island, but your custom mix could be used within a new one AND retain a backward path to all of the copyright sources. The conundrum of "nested" music NFTs that came up with Snoop Dogg's Mixtape may be fixable in this scenario.