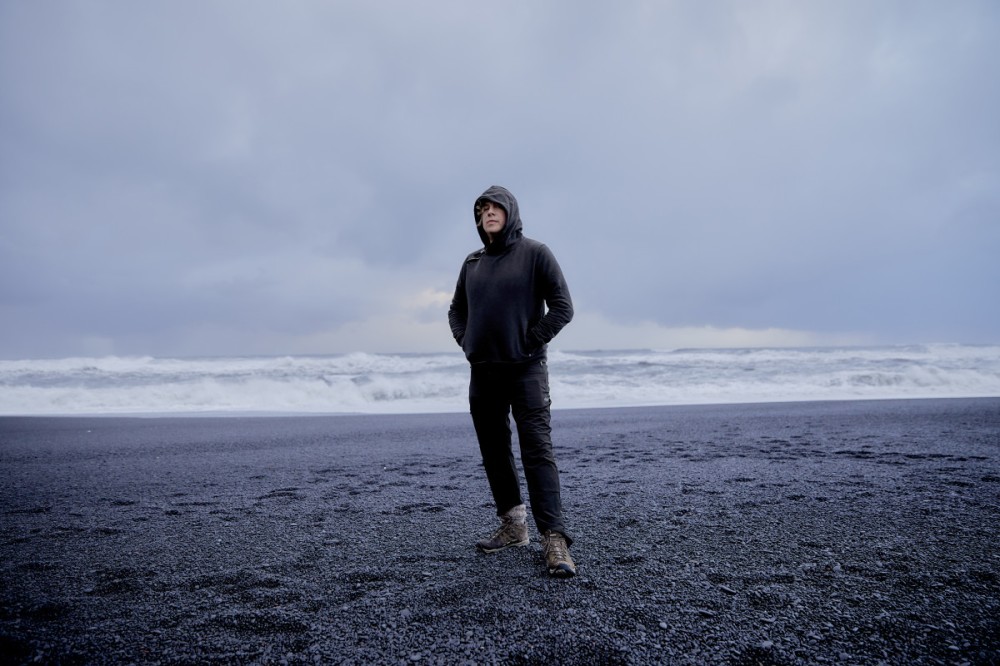 Conservationist, producer and DJ, Dominik Eulberg has released his sixth album Avichrom. The German has been putting out music related to nature, fauna and animals for nearly 20 years, going back to 2004’s Flora & Fauna. Over the years, Eulberg has been at the forefront of blending ambient compositions with subtle, melodic house music, all with an experimental edge. This new project has all of that – quirky, energetic electronics and devotion to one part of the animal kingdom – birds. Not the birds Hitchcock imagined, but rather beautiful, colorful and graceful birds, that often need protecting. Some moments are darker and pensive, like “Purpurreiher,” while others are soft and serene such as “Rotmilan” or soar like a bird stretching its wings mid-flight to catch a gust of air on tracks such as the lengthy “Braunkelchen.”

There is a nice undercurrent of energy that pervades this album, capturing the spirit of creatures who move so quickly and effortlessly. Some songs start very soft, but then pick up speed by the end. The songs are generally pretty long; so expect a journey with each bird. Many of the birds in question are having their habitats destroyed or impacted negatively by human activity, so bringing awareness to that is a key part of this album

For a new Liner Notes feature, we dive into the meaning behind each of the songs for each album. Since it is bird themed, we asked Eulberg to go more in-depth about how the birds and music are connected. Pick up your copy in physical formats and digital download here.

The following words are by Eulberg.

“Avichrom” is a neologism and means "bird colors." For this album, I am thematically dedicated to the world of birds and their exuberant variety of colors. Mother Nature has used her entire color palette here, so for the eleven colors, a native bird species can be found by name. The eleven tracks on the album are named after these species.

Due to the concept, it was already clear in advance that it might only become eleven album tracks, because you can only find eleven colors by name in my native language of bird species that are breeding here. This concept drives the cornerstones into the soil, between which I could live out myself creatively. It was important to me to create a journey through the colorful world of birds, where you can be touched and which is always varied, entertaining, and inspires to astonish.

The opening track "Schwarzhalstaucher" should on the one hand announce this targeted sound cosmos as a distilled conglomerate, which is why it is probably the most colorful and manifold track of the album. I imagined this beautiful grebe species with the bright red eyes, the famous “fire-eyes” while composing. The bird switches elements again and again, between air, land, water and underwater; celebrating group courtship under joyous dancing, raising up their body’s chest to chest, running across the surface of the water in a penguin dance style, finally building his often adventurous-looking floating nests of aquatic plants, which sometimes looks more like a mad pile of spaghetti. But here its eggs are safe from water-shy nest predators such as foxes or wildcats.

My intention here was to describe the apodictic, industrious activity of the perky blue tit. A blue tit feeds its chicks up to an incredible 1,000 times a day. No wonder, because with up to seventeen eggs per clutch, they are record holders among native songbirds. I was inspired to create the nested pads, which weave themselves non-metrically into the beat, like the blue tits like to incorporate blossoms of lavender, yarrow, or mint into their nests. This is because the essential oils they contain cleverly ward off bacteria, viruses, parasites, and fungi. Although blue tits are so small, they are very courageous and self-confident, as I am always able to observe at the feeding station in front of my studio. I have depicted this "boldness" and imperturbability musically.

The purple heron is a graceful and elegant bird that does not move quickly - in the same way that the track of the same name doesn’t make hectic movements. The heron breeds clandestinely in the reeds where thanks to its large feet, it acrobatically gymnastics through the stalks. His ornate, almost distinguished feathers inspired me to create dignified melodic structures and beats. I had the great fortune of being able to observe a purple heron very close to my house in spring. A real sensation that would have been unthinkable just a few years ago, but the progressive warming of the climate favors its spread further and further north.

According to European legends, the white stork is known to deliver our babies. That is why it was the only bird-species, which was not hunted in those days. This is where the German phrase, "someone fry me a stork" still comes from today for something unimaginable. There is an irrevocability and complete acceptance of this bird species that everyone loves - we even consider it a blessing when a stork breeds on our roofs, directly above our heads. Coupled with our aesthetic amazement at its attractiveness, its striking black-white-red coloring inspired me to create this powerful track, where there is no misunderstanding.

With a little imagination, you can also make out a snare roll figure adapted from the rattling of storks after each bar. The white stork is a long-distance migrant, an effortless glider in the thermals. As in the track of the same name, they soar higher and higher in the vortex of convective heat until, to our eyes, they become one with the sky.

For me, the greenfinch is also a pretty cheeky, gaudy, almost poppy bird that catches the eye from afar because of its bright green coloring. His singing is reminiscent of an alarm system, as if someone had broken into a car. The track is by no means shy either but goes straight on the offensive in best greenfinch manner - beefy and with a high degree of ataraxia.

Where does it get this energy to keep regrouping and inventing new motifs? Maybe it's because greenfinches feed on a strictly vegan diet. Only fruits and buds are on its menu. Without prior notice, it suddenly smashes a snotty bassline into our ears, making us think for a moment that the Cologne Cathedral is a chip shop. But with all the life-affirming superpowers, his vulnerability also becomes clear at the end: in 2009, there was a major greenfinch mortality caused by trichomonad infections, mostly transmitted at feeding stations and birdbaths. That is why it is so important to clean them regularly.

There are bird species that imitate other birds, such as starlings do. This behavior is called mocking. The icterine warbler is a master at imitating other birds' voices. Its loquacious, loud singing invents itself anew again and again. So, the track "Gelbspötter" is also tremendously varied and sometimes even a bit "mischievous" in its invention of new sound sequences. The bassline is especially cheeky! Skipping through the track, you can almost get the feeling that it's several songs. But the powerful bass drum in the very best warbler manner sews the manifold motifs together like a red thread, which is wildly intended. In this way, new melodic pearls are strung together again and again to form a sparkling chain of music.

The golden plover is a very distinctive, almost aristocratic bird species. No wonder it is so idolized and adored in many countries. I love it too, with all my heart. His appearance makes every cell of my body rejoice. In order to set him to music, an orgiastic fireworks display was necessary, a single tonality would simply not do justice to this bird. No, this would almost be a discrediting of the magnificent wader. That's why the track permanently transforms from one tonality to the other. But with all the festive revelry, there is also a sorrowful melancholy, because "Goldi" is now extinct as a breeding bird in Germany due to the draining of its breeding areas, such as moors and marshlands.

The song begins very wistfully and worriedly, because whinchats, as grassland birds that build its nests on the ground, have a hard time nowadays, a very hard time. On the one hand because there are hardly any meadows left, on the other hand because they are mown up to five times a year and whinchats no longer have a chance to raise their fledglings. In a yet intact habitat, it is a magnificent appearance, as you can hear in the track full of joy. You can often spot whinchats perching on a fence post, from where they then unerringly start their hunting flights.

The track "Braunkelchen" is always in motion, because similar to robins, whinchats often "curtsy" and wag their tails lively. But at the end of the track, the rose-colored glasses are taken off again and we are brought back to the bitter ground of reality. The long outro is not a good omen and augurs less bright times for the lovable species.

The red kite is an impressive bird of prey that can also be wonderfully observed at close range. The track invites you to marvel at the elegant and seemingly weightless gliding flight of the raptor on its forays. Its distinctive forked tail is a striking feature. But there is also something fragile about this song. More than 50 percent of the entire world population of red kites lives in Germany. We therefore have a special responsibility to protect and preserve this species. But its future is on shaky ground. Wind turbines are making it difficult for it, and agricultural poisons and the like are doing the rest. We always need the open dialogue to see the whole picture.

Unlike its relative the green woodpecker, which can often be observed in our gardens, the grey woodpecker is a very shy forest dweller. But even in its reclusive existence, so much beauty is revealed, which comes to light when we humbly become silent observers and surrender to the flow of this song. Then we will discover more and more details. The supposedly grey bird, so unassuming at first glance, reveals sublime details of beauty, like playful ornaments - a red crest on the male, elaborately banded wing feathers, green dorsal plumage with bright yellow tail feathers, purple eyeball and a yellow lower bill. Grey woodpecker, what a misunderstood flying jewel you are.

Proud and self-confident it comes along, our most common large gull. And indeed, it is quite a whopper, even bigger than a buzzard. It is a real food opportunist and feeds almost everything that's left standing. This audacity becomes very clear in the middle of the track: while we are staring dreamily out to sea and listening to the longing melodies, a cheeky herring gull swoops down out of nowhere and steals the fries out of our hands. The sawtooth cycle begins.

The colors marked with * have been added to the original species name, so that the concept, I conceived in my native language German, also makes sense in English.