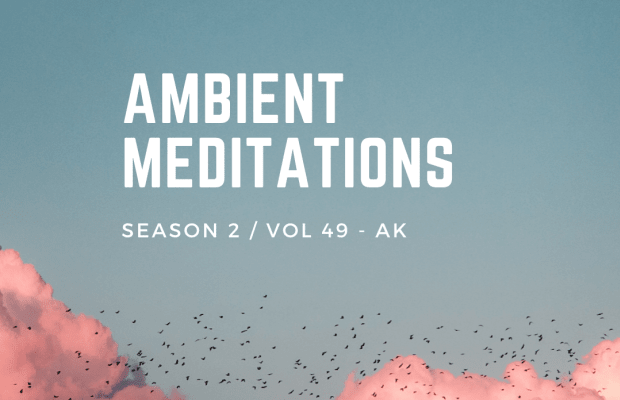 For many artists, music is a cathartic process; for some, it's a process to keep themselves in check and balanced. For Aljosha Konstanty, also known as AK, it's all of the above. Music for AK is a way to cope with anxiety, and his recent signing to Han Solo's bitbird label is a testament to the fact that it's working. "Sunrays" is the first single for AK on the label and proves that beautiful ambient soundscapes can exist alongside a 4/4 beat in a way that is soothing and slightly uplifting. We have always been huge fans of this balance on Ambient Meditations, and we look forward to hearing more from AK in the future on this label and in general. His guest mix hits the sweet spot of dreamy and uplifting, a perfect mix to pick you up like a warm cup of black tea spiked with a little whiskey. Enjoy.

Men I Trust - Serenade of Water

AK Shines a Light on Anxiety with a Reposeful "Sunrays" Single

For Aljosha Konstanty, otherwise known as the German producer, AK, anxiety is an all too familiar feeling. Luckily, he's found solace by rerouting these overwhelming emotions into calming, ambient soundscapes, thus using music as a beautiful coping mechanism. On September 17 AK will make his bitbird debut with his newest track, "Sunrays," which he says, "metaphorically stands for the relief provided once you've gone through a hardship and accomplished something you've been looking forward to." Just like the shining sun, this instrumental track is the light at the end of a dark tunnel of anxiety for AK.

AK hopes that his music can also offer a sense of relief for others who experience similar fervor on the regular, or for anyone who simply needs to press pause on life every once in a while and press play on a track to take a few deep breaths to. "I aim to take my everyday life experiences and the feelings they create to make music that hopefully helps people cope with their day-to-day stress," he shares. The weightlessness of "Sunrays" offers a soothing effect, while the reverberation of a gently pumping drum beat simultaneously keeps the track in motion. It's the perfect tuneful elixir to remind listeners that disarray is only momentary.

Following his recent releases, AK has drawn acclaim from BBC Radio 1, Triple J, and even landed a sync in the popular Rocket League video game. He's also a huge gear-head and has accumulated an impressive stack of instruments––including a Eurorack modular rig, Korg Minilogue XD, Teenage Engineering OP-1 and over 30 more pieces of hardware––which MusicTech deemed "prime for ambient dreamscapes."

Take a moment to sit back, indulge in AK's latest creation, and let his Sunrays beam up your mental clarity.

Hey there! I'm Aljosha and I make ambient music under the moniker AK. I aim to take my everyday life experiences and the feelings they create to compose heartfelt music.