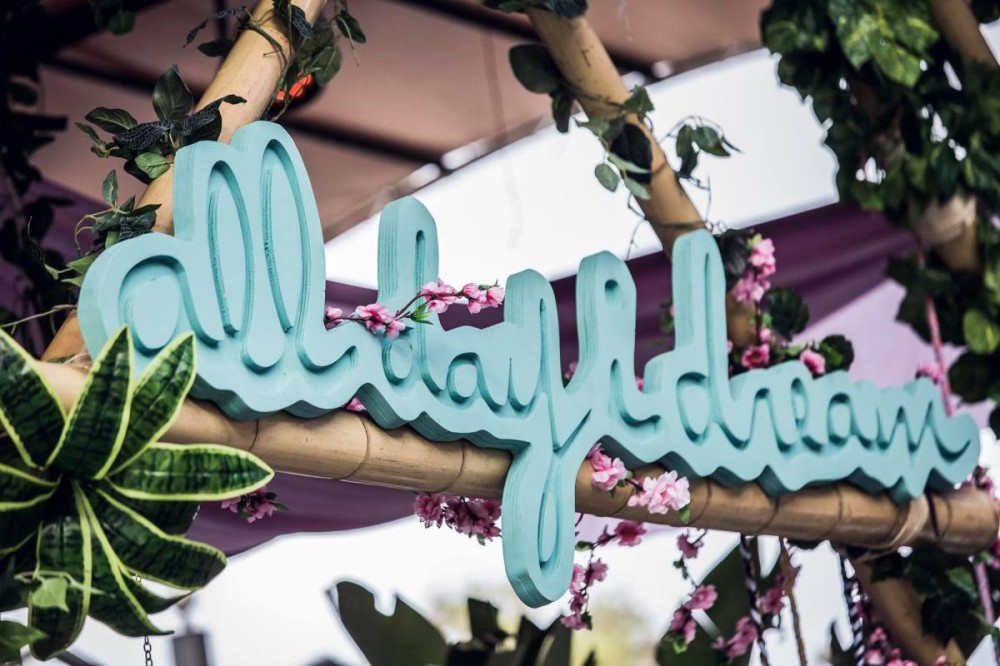 World renown, glove-trotting DJ/producer Lee Burridge started his All Day I Dream label back in 2011, and has seen a meteoric rise in popularity in the United States.

Focusing heavily on the events side of the music, All Day I Dream's daytime parties offers something that most other events in the space do not.

Where most dance music events are an exhibition in black-t-shirt-men, flashing strobes, and all eyes fixated on the DJ booth, Lee Burridge's parties are bedecked in fairly lights, Asian lanterns, and a sense of community unobtainable by any other sound.

Purchase Tickets To All Day I Dream's Upcoming Festival Here

With All Day I Dream's festival just days away, we had a chance to sit down with Lee's close friend and label manager to All Day I Dream, Philip Soeffker, to dive into the deeper history of All Day I Dream, Lee Burridge, and the sound that revolutionized the world's assumptions of dance music.

What Is All Day I Dream?

All Day I Dream has grown over the past decade to be more than just a record label or live event series; it truly is a community that revolves around something that is greater than the sum of its parts.

The vibe an aesthetic that runs throughout all of what the label does is a distinctly feminine experience, leaning on bright colors, flowing movement, and darker skylines of the cities the events are held in.

"After his time in Asia, Lee instantly knew he wanted to change the dark techno scene that was everywhere here in the States. So he made a mix of this style of music for his girlfriend and began sharing it with friends and the feedback was instant and undeniable." - Philip Soeffker (Label Manager, All Day I Dream)

To do this day, years after its release, this mix means a lot to Lee and still defines his vision of the label. Despite multiple attempt to license the mix for official release the team has been unable to do so.

How All Day I Dream Started

Matthew Dekay and Lee noticed there was something special in the music they wanted to play, that didn't focus so much on guys first pumping in black t-shirts and more put their attention to the softer, more melodic styles of music that attracted a wider and often more mature demographic.

"Lee started DJing in the UK and then traveled to Asia and could never ignore the feeling the dance floors were missing the community vibe. Everything was too focused on the individuals and not on the community behind the music" - Philip Soeffker (Label Manager, All Day I Dream)

Deekay was living in Berlin at the time around 2011, and Lee and him got together in the studio to work on what would become All Day I Dream's first release. Their main intention in the sound they were after was simple; make music that everyone, women and older age ranges, would hesitant to listen to live.

The music itself  leaned heavily towards the daytime vibes that prioritized being with each other instead of being in some dark nightclub where you can hardly talk, let alone connect.

Dekay and Burridge were close friends for many years leading up to when All Day I Dream was started, but they each have their own illustrious way in which they reached a point in their careers was the ideas behind the label could even take wing...

Who Is Lee Burridge?

Lee Burridge is a UK-born DJ and producer who shaped the underground club scene in Hong Kong throughout the early stages of his career in the early 90s. Burridge was only 22 years old at the time, and the move marked his jump to DJing full-time, professionally.

Burridge's ambitions soon grew beyond just Honk Kong, and his travels throughout much of the rest of Asian helped him expand the influence of the music he championed. This was most noticeable in his journeys and performances in Haad Rin, Thailand, where he grew to be a leading name in bringing dance music to the island.

Despite his rising notoriety in the Asian markets, Burridge at the time had few credentials in his home markets across the UK.

So he returned back to England in the late 1998's where he was invited to play at several leading parties due to his close connections with some of the UKs top DJs at the time - connections including Craig Richards, Sasha, and others.

His slow grind throughout the industry continued for the better part of the next decade, accruing many more production credits, bigger gigs, and landing top spots in the yearly DJ Magazine charts and polls.

The work culminated in the launch of the All Day I Dream party in 2011, on a Williamsburg rooftop... and the rest is history.

All Day I Dream Events

The idea of a live event was always the priority for All Day I Dream; even from it's earliest onsets.

"At the time in 2011, something needed to change for Lee behind the DJ booth and the idea behind a daytime party was the answer for much of what he saw was lacking in the world of dance music." - Philip Soeffker (Label Manager, All Day I Dream)

And there was no better champion of this sound than Lee himself, for he had already cut his teeth and defined himself both through his tours across Asia and within the Burning Man community in America. This much is evident from the earliest renditions of the events, which still to this day feature Asian lanterns and a welcoming community.

Down to the tiniest detail, the focus of every All Day I Dream party is entirely upon the attendees; not a superstar DJ or spectacle of lights and sound.

What started as a small gathering of only a few hundred people in a blistering Brooklyn rooftop in 2011 has now grown to be massive events in Golden Gate Park and the Brooklyn Mirage.

All Day I Dream's approach to live events is much different than Europe's, which is likely why the label has found such a solid footing state-side but who's growth is still in its early days throughout Europe. But the future looks bright and the team behind All Day I Dream is confident that Europe will discover their sound when the time is right.

The Best Songs On All Day I Dream

Which Artists Are Signed To All Day I Dream?

Artists signing with All Day i Dream come from a wide range of backgrounds, as the label focuses more on the vibe and soul of the music it signs and rarely looks to replicate the success of prior releases. Always pushing the boundaries of the organic house sound forward, many of the finest producers in the industry have credits, releases, and remixes on All Day I Dream.

"Without quoting the artists themselves about why they love the label; I can tell you that we give back to the artists we work with... artists sign with a family who supports them however they can; through live gigs, extra PR, and more. We support our family." - Philip Soeffker (Label Manager, All Day I Dream)

So let's dive into some of the biggest artists who have released music on All Day I Dream and listen to just how diverse the has is, and has been, throughout its decade-long span in the world of dance music.