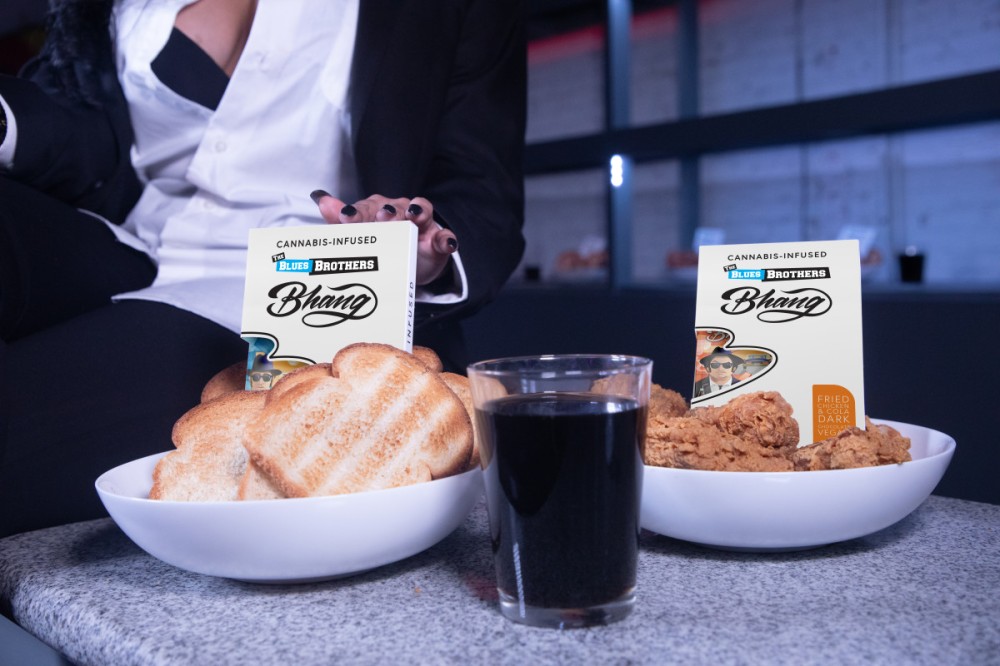 Bhang Chocolate has launched a new collaboration with Jim Belushi and The Blues Brothers. Their new Blues-Brothers-branded chocolate features a melody of flavors (see what we did there?) that may very well give you the blues bug with artwork representing the original Blues Brothers duo: the late John Belushi and Dan Aykroyd. That, along with the latest release of Growing Belushi Season 2, prompted Bhang to share a Blues Brothers/Belushi-inspired Weedsday playlist featuring songs from The Black Crowes, Aretha Franklin, Ray Charles and more!

1. The Blues Brothers - Sweet Home Chicago
From the original Blues Brothers soundtrack, “Sweet Home Chicago” (performed by “Joliet” Jake and Elwood Blues) pays homage to the strong history and influence blues and jazz have in the windy city. Both John and Jim Belushi are actually from there originally, and rumor has it Jim and Bhang President and CEO, Jamie L. Pearson, may have sparked conversation around the Bhang x Blues Brothers collaboration in that very city.

2. Aretha Franklin - Dr. Feelgood (Love Is A Serious Business)
“Four fried chickens and a coke,” orders Jake Blues (Belushi) in the now infamous diner scene, which features Aretha Franklin singing “Think.” Four. Whole. Chickens. While Elwood simply asks for dry white toast… this scene, and that music, inspired the flavors for the Bhang Chocolate collaboration: Fried Chicken & Cola Vegan Dark Chocolate and White Toast White Chocolate. Plus, in the vein of Dr. Feelgood, those flavors, and the chocolate itself “sure makes [us] feel real good.”


3. Little Richard - Freedom Blues
Both Bhang and Belushi support and do a lot of work with Last Prisoner Project, a cannabis reform nonprofit committed to fighting criminal injustice and reimagining drug policy, so Little Richard’s “Freedom Blues” feels like it hits all the right notes. To that end, Belushi and Bhang also hosted a benefit concert in Las Vegas at the MJ Unpacked in October 2021, where Belushi was quoted as saying: “The Blues Brothers. At The House of Blues. In Las Vegas. MJ Unpacked. To raise money for Last Prisoner Project. Come on!”

4. The Black Crowes - Hard to Handle

In September of 2021, Jim and Bhang launched the Bhang x The Blues Brothers Collaboration at Hall of Flowers Cannabis Conference. Later in the evening at a Bhang and Belushi-hosted afterparty celebrating the collaboration, Jim performed the classic Black Crowes hit alongside The Marshall House Project to close out the evening with a Bhang. Not so hard to handle, are we right?

Cannabis and music have long been intertwined. The beloved plant has been an inspiration for many artists, and in return their music has become the perfect companion to any smoke session. So, as Ray Charles would say..."Let's go get stoned.”