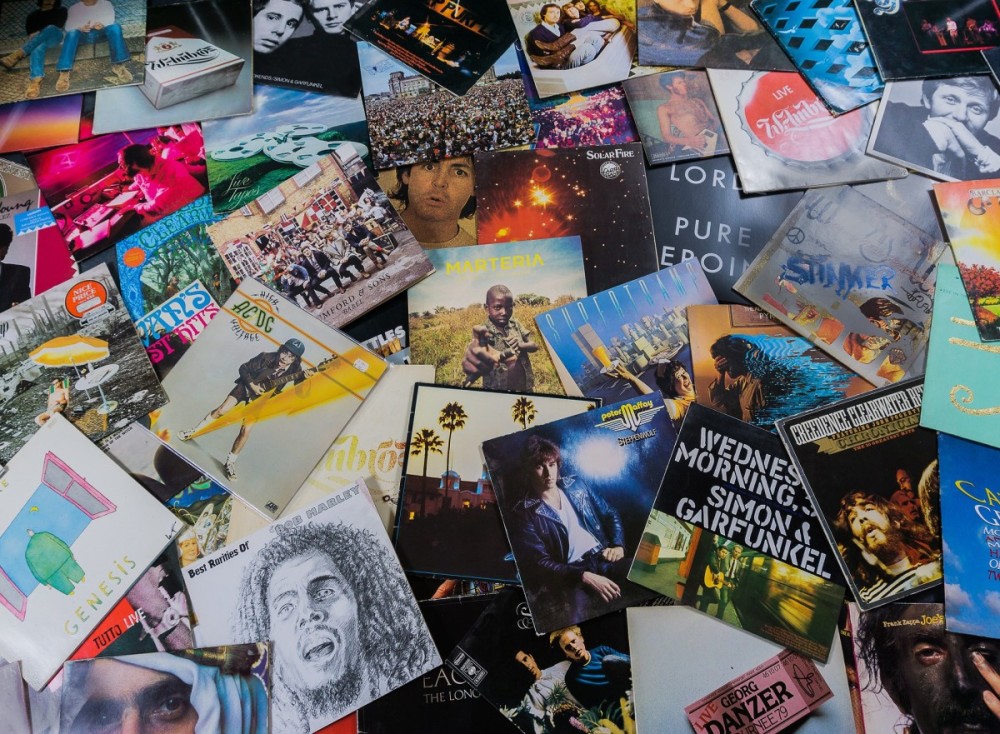 As the supply chains start to open up a bit more and the vinyl pressing plans continue to run non stop, each month should see an increase in vinyl releases as the year moves on. In February alone, Upcoming Vinyl listed more than 800 releases keeping me very busy but also giving me a lot of great music to work with. Check out my top picks for the month below and see past charts here.

Artists & Labels that are interested in having their records reviewed for this feature can send their submissions here.

Time Skiffs is the 11th studio album from the acclaimed experimental pop band Animal Collective. This special edition of the record comes in a special red pressing and is sold exclusively through Turntable Lab. Their label Domino says everything you need to know about the album with the quote below.

"Time Skiffs’ nine songs are love letters, distress signals, en plein air observations, and relaxation hymns, the collected transmissions of four people who have grown into relationships and parenthood and adult worry. But they are rendered with Animal Collective’s singular sense of exploratory wonder. Harmonies so rich you want to skydive through their shared air, textures so fascinating you want to decode their sorcery, rhythms so intricate you want to untangle their sources. Here is Animal Collective's past two decades, still in search of what’s next." - Domino

California's Central Valley Legend Fashawn joins forces with Sir Veterano for ALL HAIL THE KING, a 9 track project with some huge features from the likes of Planet Asia, Aloe Blacc, Elzhi, DJ Revolution + many more. If you dig lyrical hip-hop then you'll need to add this record to your collection.

Pete Tong & some of his dearest friends have come together on this very special 8-track vinyl which includes music from Franky Wah, Riton, Becky Hill, ARTBAT, Vula, Tale Of Us, Kölsch, Elderbrook, and a huge feature from Jules Buckley and The Heritage Orchestra. After being trapped inside for the last two years this record is a great escape to the parties of Ibiza and it sure does sound great on wax.

Lucifer On The Sofa is the 10th and probably the deepest album from Spoon. It was written over the last two years in their home town of Austin Texas. There is an energy to this album that is fierce and louder than previous works from the band, but you still get everything you love from them as well as their consistency over the years has been something that their fans have really cherished and appreciated.

I'm not even a huge anime fan, but this show has been absolutely incredible to watch and there is a reason why it's one of the biggest animated shows on earth. The music is a big part of what makes the story and action move so well and just hearing these tracks easily send me back to some of my favorite moments of the first season. This is the first time any of the show's soundtracks have made their way to vinyl and while it's not cheap by any means, this is a record you will cherish if you can find some time to watch the show.

The final installment of the groups EXTENDED mixtape series, EXTLP originally came out in November of last year on CD and via streaming platforms. Just like so many other titles, this vinyl from Modeselektor was delayed until last month. This LP is part of an exclusive box set that will only be available from the Berlin duos Bandcamp page as well as the official Monkeytown Records web store.

Sleigh Bells returned to the label that helped blow them up with their critically acclaimed project Treats back in 2010. Five albums later the band, released their latest album TEXIS at the end of 2021 but delays kept the vinyl away from fans till now. While it may not have the same magic as Treats, the music is still great and this exclusive clear record looks awesome when you play it.

After a bit of a break the award winning band alt-J returned for their 4th studio album on February 11th with The Dream. The album really represents the culmination of the bands hard work which has made them a top act for years in markets all over the world. The band has a low barrier of entry which does not take away from the impact that their songs provide. I've been a big fan for years and The Dream does not disappoint.

Vinyl collectors and fans of classic monster films from Japan will have no choice but to scoop up this amazing record. Not only does it include the original Godzilla theme but several other incredible tracks all produced by the man who started it all in 1954, Akira Ifukube. Godzilla may have finally been put to rest after this film but the music behind the monsters lives on forever with this special piece of vinyl.

Originally released by Caroline Records in 1989, Quickness is the fourth full-length studio album by Bad Brains. Not only was Quickness their best-selling album but it also landed them a featured music video on MTV for the track "Soul Craft." The reissue of this record marks the 5th release in a remaster series which is in conjunction with Org Records and the relaunch of the Bad Brains Records label imprint. Dave Gardner did an incredible job remastering the audio and any fan of Bad Brains would be thrilled to have this record in their collection.

Beach House has returned with one hell of an album. Not only is the 8th studio album Once Twice Melody a double album, featuring 18 songs presented in four chapters, it also comes in this beautiful white and gold box set that is simply stunning to hold in person. My favorite part of this project is just the diverse group of sounds you will hear from a variety of instruments across the album. There is a little something here for everyone and it al just goes together as you would expect from a carefully crafted album, an art that is almost lost these days.

This incredibly dope project from Seattle artists Chong The Nomad and STAS the Boss is actually two records! Not only will you get the solo debut from THEESatisfaction’s Stas Thee Boss, you also get Chong The Nomad's debut EP Love Memo. Both of these projects can easily hold their own but bringing these two incredibly women together gives the listener a real taste of todays Seattle music scene from two of it's brightest stars. This release was limited to 750 numbered copies with reversible cover art from  Seattle artist Jennifer Campbell. Both records were also specially mastered for vinyl by Adam Straney.

Literally leading the charge as far as rock music in Texas goes, Leon Bridges and Khruangbin can really do no wrong in my eyes. The only issue I have with this project is that it's just an EP making it pretty short. Musically, it's impeccable and I have listened to this project countless times since its general release earlier this year. Their music is powerful but also just melts into your brain with lyrics and guitar riffs that stay with you long after the record stops spinning.

While it technically isn't a February release (it was just announced and put on pre-sale on 2/22), our favorite robots have once again broken the internet with the reissue of their classic album Homework. This release was so big for the french duo that they brought back their social media accounts in order to hype up a special streaming performance of their live show recorded at The Mayan Theater in Los Angeles in 1997. They performed that show maskless and if you were lucky enough to watch the stream live on Twitch, you got a chance to see how special Daft Punk really was for electronic music and really just music altogether. That set today would still go so hard and I can't wait to hear some of those tracks on my own home system once this vinyl actually makes it into my hands!

Rounding out our list for this month is another reissue from 2004 and one of the truly stand out albums from hip-hop legend and master mc Masta Ace. The 5th studio album from Masta Ace, the project features artists and producers such as Jean Grae, Big Noyd, Wordsworth, Edo G, The Beatnuts, Rahzel and 9th Wonder. It's a must have for any real Hip-hop head and it sounds so much better on this new pressing.