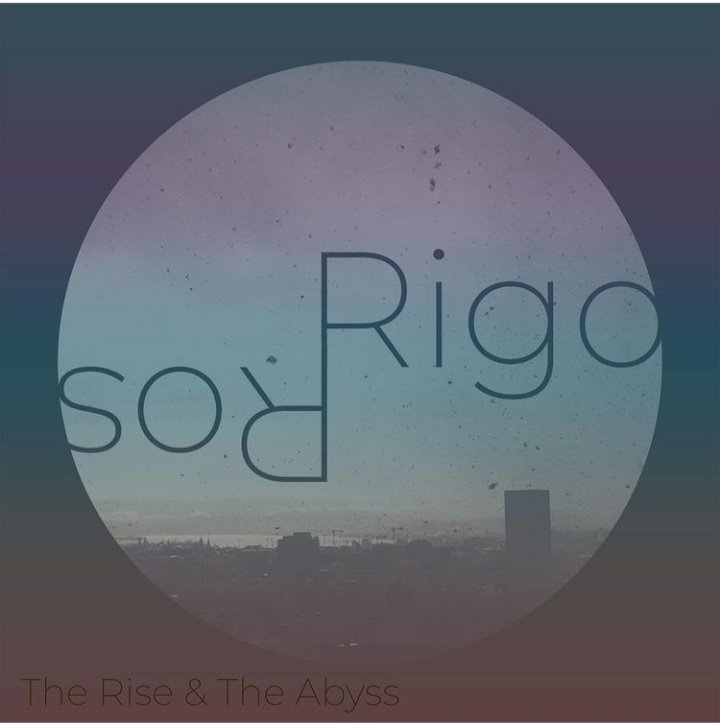 Rigo Ros hails from Zurich, Switzerland, and creates soothing, futuristic, and ambient electro tracks that incorporate elements of lo-fi, dub, electronica, and glitch hop. Formerly in a metal band, Rigo draws inspiration from many eclectic sources to create minimalistic bass driven music that also incorporates sound waves below 100Hz. Rigo Ros explains in his SoundCloud bio that his atmospheric music filled with intoxicating rhythms will relax you, relieve pain, and support your hypothalamus (brain functions involved in both sleep and emotional activity). He claims that the music made in his manufacturing plant at the heart of Zurich will in fact have healing properties, and he recommends listening from the beginning to end of his newest work, “The Rise & The Abyss” (a 5 track EP), to have the best results.

You must be wondering if these claims are true or how this music effected me while listening to the EP, and writing this review. Honestly, I was impacted by the bass line. I felt it did have a stronger power and there was a perceivable thud and fullness that wasn’t distorted by its loudness. The mastering is also very well done and tasteful. More attention is drawn to the bass due to the overall dryness of everything around it as well. The melodies and effects are very simplistic, and Rigo leaves a lot of silence around every note to be truly heard. The closest comparison

would be REZZ in her earlier works. Throughout all five tracks (“Reflections,” The Story,” “Isotropic,” “Angry Bulldozer,” and “Black Aura”) there is a common theme of driving percussion loops with a heavy bass. Every track is smooth with clean lines. You notice the simplicity right away and the slower tempos. Ranging from 80 to 120 bpm each track is different from the next, but Rigos Ros is able to weave them together with similar electronic effects.

When I write about music, I often put a few notes down on paper before researching anything about the Artist to see what my initial reaction to the music will be, and I did write the word “soothing” in my notebook. I had no idea part of his mission was to heal using sound waves under 100Hz. I could also imagine this EP as the soundscape to a new Syfy feature film easily. These tracks flow effortlessly from one to the next, and you could put them on while working out, driving, reading or studying to enhance your senses and lower your stress. If these tracks were to be played in a club setting, I think a strong visual accompaniment would add a lot. It would be a full immersive experience in the right hands for sure.

We had the opportunity to dive deeper with Rigo in a recent interview to get to know the man behind these grooving beats, hypnotic melodies, and driving basslines.

Can you tell us the origins of Rigo Ros?

The pseudonym “Rigo Ros” was created in 2021. But my first steps in the world of music were made when I was about 12 years old as a drummer in a Metal-Band. At that time bands like Limp Bizkit, Korn, Slipknot and Linkin Park were my idols. So the connection to Hip-Hop and Electronic Music was already there.

This lasted until I was about 20 years old. After our band broke up, I spent most of the time on producing electronic music. Artists from labels like Warp Records, Ninja Tune, Stones Throw Records etc. had more and more influence on my musical progression.

In between these years I was part of a few other bands, but they all dissolved again. Only one band lasted until today, in which I’m still part of besides Rigo Ros.

Who are some artists you have been listening to lately?

My own playlists are not really genre specific. So possibly the previous melancholic song could get run over by a trash metal riff. Sometimes I think my Spotify algorithm is totally in a mess because of this.

But at this moment I’m very into stuff from Ivy Lab and Robot Koch. I also listen to the Swiss artist Benjamin Amaru very often lately. And when I just want to satisfy my desire for Metal music, I listen to the new album by Gojira.

What are your favorite places to visit and festivals in Switzerland?

One advantage of Switzerland is that everything is so close together. Many things are practically on the doorstep or can be reached quickly. As a city dweller of Zurich, I’m sometimes happy to have a little more distance to the urban area. In this case I can recommend the Engadin in the canton of Graubünden. Ticino is of course always very popular for the northern Swiss. The rain is warmer there.

Otherwise, of course, you can find me at some Openairs in Switzerland. For example at the Lumnezia or St. Gallen Openair. Music, camping and beer, what else do you need. If you like it a little harder and faster, Greenfield Festival is the place to be.

Frequencies below 100 Hz are not only audible but can also be felt on the body due to the changing air pressure. A fat but balanced Low-End makes people move. When people dance, they feel safe and free.

I think I need to dig in my past. There are countless songs that I would have to list now. But what always captivates me is:

Have you gotten a chance to play out yet?

There were some concerts with my Metal Band from the past. The other projects were not mature enough for live concerts. As Rigo Ros I haven’t played any concerts yet. But these are surely planned.

What are some of your favorite local venues and artists?

Summer in Zurich is packed with events (or would be, without Corona). The Streetparade is of course mandatory. Good concerts and music can always be found at clubs like “Moods”, “Rote Fabrik” or “Stall 6”. However, you can always find very cozy and trendy places in the area “Hardbrücke” and “Wiedikon.” Perfect places to have a beer and talk about music and the world.

One of the namable artists is Sophie Hunger. She does her own thing and is difficult to classify exactly. But you can find many Trip-Hop elements in it. I’d also like to name Dimlite. A few years ago, my friends and I listened to songs from Stones Throw Records on a continuous loop. Dimlite was the Swiss pioneer of experimental electronic music and downtempo for us. Oh, I recommend Benjamin Amaru for sure as well.

What sport would you want to win an Olympic gold medal for?

In my teenage years I was a passionate skateboarder. So I would definitely choose the gold medal in skateboarding.

What is one world record you would want to set or break?

I would be very proud if I could make the longest Tagliatelle in the world.

Rigo Ros · The Rise & The Abyss