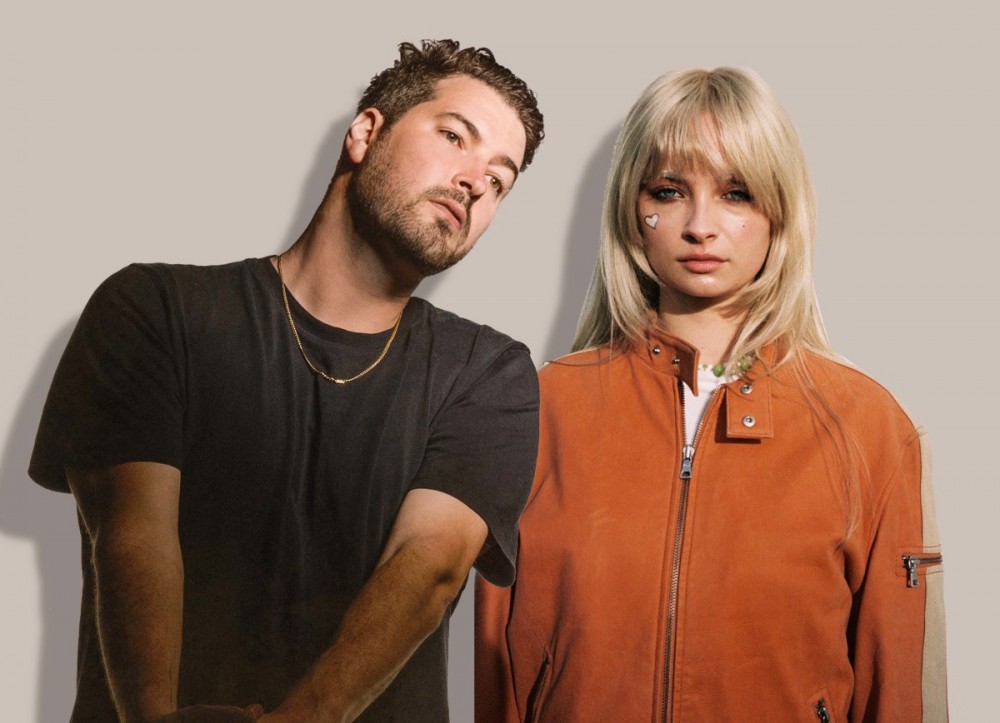 Today, Sydney’s triple-platinum tastemaker Hayden James releases his latest dose of euphoria in “Waiting For Nothing” feat. Yaeger, out via Future Classic. The track is the latest installment of James’ collaborative releases from 2021, which has also seen him join forces with Crooked Colours on “Rather Be With You”, and a team-up with Nat Dunn and Gorgon City for “Foolproof”.

“Waiting for Nothing” is elevated by Yaeger’s impassioned lyricism that sifts through the floor-shaking production from James. Rising synths interweave through the pulse-racing house beat as he crafts a euphoric pop atmosphere, inviting the Swedish-born singer to effortlessly pour her cascading vocals throughout.

Below, we invited the two to sit down and have a chat for our new series Artists Asking Artists.

Y: You posted an old picture of yourself a while ago when you wore a BAPE hoodie. Are you into streetwear? How has streetwear influenced you?

HJ: It's a fake. I couldn't afford an actual BAPE jumper at the time. I'm not too much into streetwear but I'm massively influenced by the man behind BAPE - Pharrell Williams. I am a huge fan of N.E.R.D and basically every other project he touches.

Y: Where and when was your first headline gig? What does that gig mean to you?

HJ: My first headline show was at Oxford Art Factory (OAF) in Sydney when I released 'Something About You'. I sold out the first one so quickly we did another one. I remember feeling so nervous putting a show on because I didn't think anyone would buy tickets. I still feel the same way when I announce shows now. The feeling of being on stage and people connecting to something you wrote in a studio is wild to me. I live for it.

Y: If you had to color your hair tomorrow and wear that hair color for the rest of your life, what color would you choose

HJ: Blonde. I bleached my hair when I was 12 and it didn't go too well. Might be time to try again.

Y: You’ve obviously had loads of success, and it ain’t stopping!! But it doesn’t seem like it’s gotten to your head, and that’s what I love about you! You’re still this chill, fun, open, caring person who just loves to make music. How do you think you’ve been able to stay grounded, and focused on your goals?

HJ: Firstly, thank you so much. That's lovely to hear :) I guess I don't really buy into any of the fame stuff or popularity. My amazing friends and family keep me grounded. My friendship group is mostly from high school and they know me too well to pat me on the back all the time. We're all the same. I just write music for my job. I'm super lucky.

Y: If you got the opportunity to do drag, what would your drag name be?

Y: If you were a player in Squid Game, which game do you reckon you’d be best at?

Y: I bet you’ve achieved a lot of your dreams and that you’re living your dream right now. But what else do you dream of? What are the things you’d still like to achieve? Either short-term or long-term.

HJ: I want to experiment more with my music. I would love to put out a bunch of EPs with other artists and explore different genres over the next few years. I want to feel more confident in my skills and let that guide me instead of looking outward for inspiration.. a little deep but you get me.

HJ: Tell me about the local music scene in your hometown. Have you performed many local shows?

Y: Stockholm is obviously the pop mecca, so it’s very focused on the pop scene (which I love). But we also got some sick underground music coming from local basement studios that give the edge to the Stockholm scene. The live scene is not as big as in other countries, I’d say there are a lot of amazing headline shows going on but due to venues needing to shut down because of complaints we don’t have enough small venues to create a community of lifting and highlighting new artists. I wish we had more of that. I was going to do a full night of artists & DJs and have my friends doing pop-up shops at this place called ’Södra Teatern’, a ‘Yaeger & Friends’ night, where we could just help each other out and have fun and lift one another. Be collaborative. Then Covid hit and it got canceled, but I wish we had more of that!

HJ: You can only listen to one genre of music for the rest of your life. What is it and why?

Y: Rnb. It’s pop, soul, and hip hop all in one genre. And I don’t think I can get bored of Rnb, it makes me feel too good.

Y: I don’t cook much… hehe. I should though because all this takeaway food is not good for my wallet!!! So it would be something simple that doesn’t take too long (otherwise I get bored). Like these saucy tacos I do: fried chickpeas with taco spice and kale in a wrap with oat sour cream, cucumber, lime, and coriander. I could probably eat that 5 days in a row.

HJ: When did you know you wanted to become an artist?

Y: It’s always been there since I was a kid dancing and singing along to the ‘Hits For Kids’ CDs on my stereo, and being glued to the TV watching MTV. I can’t remember having a moment where I had a realization, it’s more like every decision I’ve made led me here.

HJ: When we first started chatting I was surprised you knew so much about the Australian music scene and Triple J coming from Sweden. Do you have an Australian family connection?

Y: Yes baby!!! My mom is married to an Aussie (shoutout Andrew) in Melbourne, so I’ve been there a couple of times and I looove it there. I miss my Australian bonus family, they’re such a fun and lovely bunch.

There’s something about the music scene that is so interesting too - all your festivals, the hot weather, the more left-centered/alternative dance music, underground artists, the singer-songwriter vibe (love me some Tash Sultana), all in a big mix. Ugh, can’t wait to go back.

HJ: What's next for you? I love your writing style and voice so much, I can't wait to hear more!!

Y: Thanks, Hayden you’re such a legend.

Releasing more music, playing live, dropping music videos, and keep traveling is what’s next. Just doing what I love. Can’t believe this is my life, haha.

I’m so so excited for everything that’s coming!! It’s a bit different from what I’ve released before, but I wouldn’t want it any other way. I’ve grown a lot these past two years and I feel like it’s only fair that you can hear it through my music. Got a single called ‘See You Dance’ coming out in December with a music video I shot with my friend in Stockholm. This is where you heard it first y'all.

HJ: Being a musician you get to travel around the world writing and performing. What's your favourite city to write in?

Y: I’d say London. I live here at the moment, and I feel like I’m endlessly inspired when I’m here. This city just connects very well with who I am.