Arising from a successful music career of working with production team members of the Pixies, U2, Collective Soul, Snoop Dog, Pink and The Fray, comes a honest new moniker suitable for the year we are having, BLAZAR. Now, BLAZAR is bringing his pop fans over to the EDM world with his 2020 releases.

Starting with his ‘Precious’, the galactic nucleus explores just enough sponstinuity to keep things interesting and leaves us curious for more, while hitting tones to write home about. 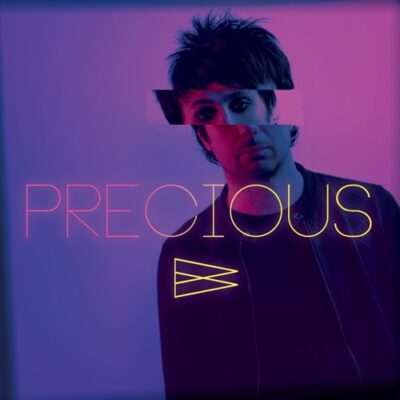 BLAZAR shares on the creation of ‘Precious’:

‘Precious’ started out as a kind of beat, tonal idea with guitars and such that Anthony Resta had been tinkering with.  He sent it over to me in stems and I ended up adding a bunch of stuff and co-producing the track with him.  Then my studio buddy who is also in Spokane, Jay Condiotti (Score Keepers, Collective Soul), got together and we wrote a topline for it.  From that foundational idea I literally spent months crafting sounds, adding parts, synths, guitars, drums, and really honing in on this kind of Prince meets Peter Gabriel thing I was flirting with.

It then went off to Troy Welstadt (Pink) in Portland who added a bunch of synth parts on as well, and then to Mark Needham who mixed it. Finally it went off to Hans Dekline (U2, Pixes, Snoop Dog) down in LA who mastered it.  It was all remote and all done during the pandemic.  It was really such a cool experience, and I’m just so proud of the track as a digital fingerprint of exactly what BLAZAR is about.  Pushing boundaries and just letting the music go where it wants to go. I have never done or even attempted a song like this, and it was just such a fun experience that I think translated into the track in a rad way.

While another one of his recent releases ‘Tomorrow’ was crafted with EDM’s finest DAXSEN, BLAZAR is warping his former Ryan Cabrera-like persona into more of a progressive James Arthur and beyond. Intrigued on his developments and true talent, we reached out to hear more about who is BLAZAR?!

What words could you share around your dance music release,’Tomorrow’? 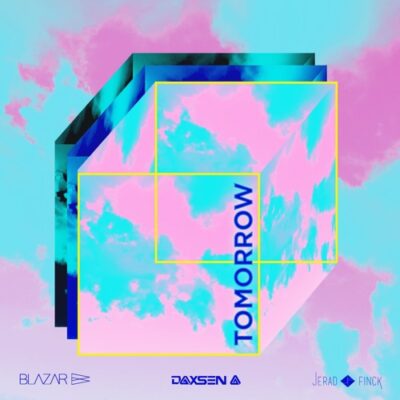 Tomorrow is a track I wrote and co-produced with DAXSEN.  I am definitely doing more releases in this vein.  I am addicted to analog synths, my studio is over-flowing with 80s plastic haha, and I really love mixing those old sounds in new ways with all the cool digital shit we can do now.  I love those old sounds, 808s, Junos, Moogs etc and I just think that I have really found my place sonically.  Tomorrow was a hopeful song I wrote about this garbage year we are all struggling to get through.  Our anxiety as a country is through the roof, you see it everywhere, and the idea for the song was simply that we can have tomorrow if we want it, tomorrow can be different, tomorrow can be new, tomorrow can be the start of something better.  This doesn’t have to continue.  We are all better than this hatred coursing through the heartbeat of America. That was the idea at least.

Please tell us a little about your music journey that led you to your BLAZAR project?

I’ll try to do the fast food version. I’ve been playing music for as long as I can remember.  I started in jazz very young as a child, with my grandfather’s trumpet all the way through college, and even for a bit professionally until I joined my first terrible college rock band as a drummer.  I had never drummed before, but they let me learn and be the drummer anyway.  It was truly a life changing experience, even if it was mostly Weezer and Jimmy Eat World Covers because I just fell in love with writing and making music.

From there I moved on to guitar and keys, and eventually vocals.  I started writing songs of my own eventually, and I recorded this song called “Runaway“. I put it out and it just took off virally.  It got sync’d in several major TV shows, a Movie, ESPN used it for their US Open and the NBA Finals that year, just crazy stuff.  From that I signed my first indie deal with Rock Ridge Music, a cool Americana Indie label. We ended up putting “Runaway” out to radio independently and it charted in 3 formats and was the #1 Independent song on Mediabase that year.  Just bananas.

From there over the next several years I signed deals at ADA, AWAL, BMG, Kobalt,  slowly making my way through the industry, meeting producers, writers, managers, other artists, touring constantly, sometimes 240+ shows a year, all the while releasing music and touring relentlessly.  In 2016 I put out a song “Criminal” that ended up selling 60,000 copies and debuted on Billboard.  Following that I released a song called “New Kids” that went viral with a couple millions streams on Spotify, I followed that up with a song called “Home” that was heard on New Music Friday by Tom Sarig, owner of AntiFragile Music.  He called me and offered me a full album deal.  At this point I was going by Jerad Finck.  I had been rolling around this vision of a project that I had been calling “BLAZAR” for a minute, and I pitched it to Tom.  He loved it and said “Let’s do it.”

BLAZAR, my confirmed identity as an Alien/Galactic Nucleus, is a conglomerate of all the rad producers, writers, artists, beat makers, and composers that I’ve met over the last few years as “Jerad Finck.”  I wanted to do something old school. The industry now is such a conveyor belt industry, where you literally go and sit with a producer or collab team for a day, write and produce a song, and that’s it. What comes out that day is it, it’s very efficient, yet uninspired, and always rushed.

I wanted to do it differently, like back in the day where we would sit together and craft songs over time, bar by bar, beat by beat, and Tom at AntiFragile gave me the ability to do that.  My Vision for BLAZAR is led by me, as the lead Vocalist, Writer, and Producer, but every track is a collab with several other rad dudes. such as Steven Solomon (Platinum Songwriter/Producer He most recently wrote/produced James Arthur‘s “Say You Won’t Let go), Anthony Resta ( Duran Duran, Collective Soul), Denny White (Tiesto, The Fray), Jake Newton (Sleeping Wolf), Kyle Davis (HEwas), Jay Condiotti, David Filice (DMC), DAXSEN (Superstar EDM Ninja), Hans Dekline, Troy Welstadt, and several other sound ninjas.  The idea was for me to be both Artist and Producer, and collab with my team, kind of like the Neptunes, in this vessel that is BLAZAR.  It is what it is, pure creative adrenalin, it’s a bit Daft Punk, EDM, Hip Hop, mixed with Alternative electro pop.  It’s BLAZAR. 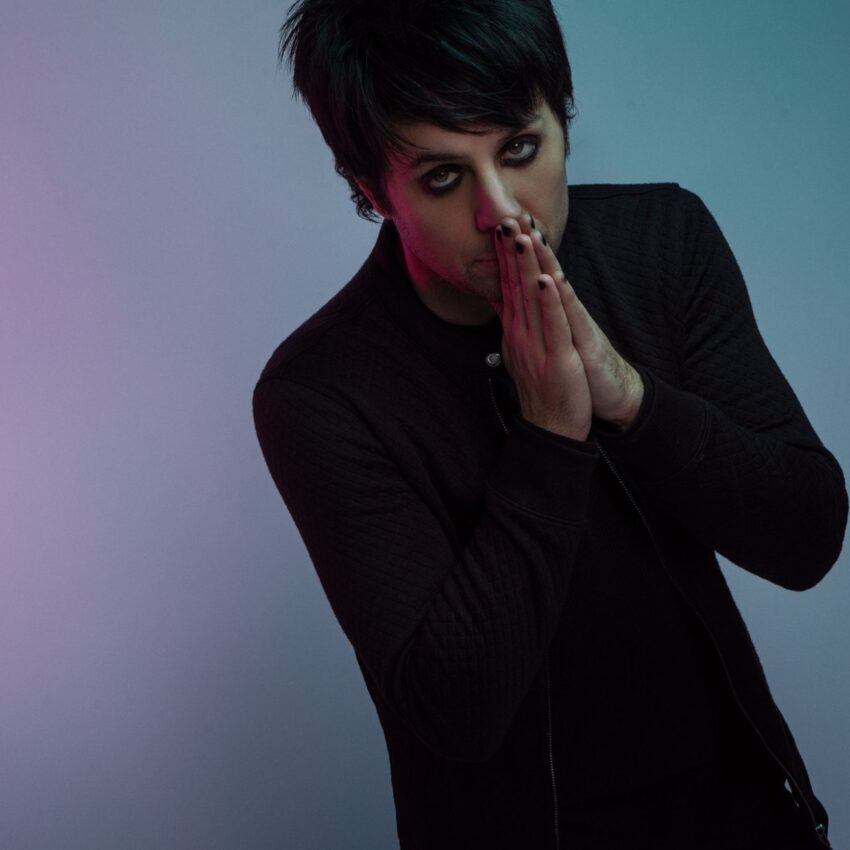 How is it living in Washington right now? Are there people rioting around your town? Have you gotten on the front lines in the heat of the riot? What have you seen?!

I live and bounce between Spokane Washington, and LA.  To say they are diametrically opposed cities would be an understatement.  Spokane wasn’t hit as hard with the rioting as Seattle or Portland, but we have still had our issues. Spokane, and Eastern WA in general tends to leans conservative as opposed to the bright blue West side by Seattle, so here we have been struggling with the mask debate,  people refusing to comply, people attacking and ridiculing those who do comply, extreme anger towards leaders who people believe are overstepping their authority by mandating masks, people refusing to accept reality, people who think the virus is fake, people who think BLM is a terrorist organization, and of course the “All Lives Matter” morons. We have those in high numbers…

It’s a blender of anger and ignorance, and there isn’t a lot of communication being had anymore. We also have a latent White Nationalist undertone here in Northern Idaho/Eastern Washington that has really reared its ugly head during this insanity. My family, my wife Kaila,  and 2 year old daughter Harper haven’t really left the house because of that. The anger is palpable, dangerous even.  I think pockets of the country are over inflamed, and that is definitely the case up here in the Pacific Northwest as a whole.  I don’t see it easing up anytime either as the message from the WH does nothing to add legitimacy to either the Pandemic or the Systemic Racism that is ripping our country apart. Tensions are extremely high, especially between our Governor Inslee, and Eastern Washington, and the WH for that matter. This one goes to 11, and I feel like we are there.

What are 5 tracks you would likely play during a set?

What intentions do you put behind your music?

All of my music, regardless of theme, tends to touch on individuality and self-actualization.  I want people to be able to make the changes they need to have a better life.  I was a mental health professional before I got my first record deal, and that vibe has never left me, in fact it’s the central tenet of what I do.  Music to me is energy, and energy has the power to compel. I hope to create change through my music.

What is one philosophy you like to live by?

I was one of those crazy philosophy majors in college, and I honestly just don’t know anymore.  I thought I did, I felt pretty secure in my world view. I was super into Cartesianism, Viktor Frankl, and was a dualist for any nerds who are curious. Well, this year has changed and shattered my view on so many things.  So, if I were to say anything, it would probably be something like “The time for now is now.”  At least something like that is what I say to myself every day as I work endless hours in a room alone making my personal soundtrack to a pandemic where hundreds of thousands of people have died.  It’s insane and sounds a bit dystopian.

We’re all one melody away from changing our life.

What is next for BLAZAR?