Read this next: 5 times Studio 54 was the craziest nightclub on the planet

Studio 54 was a former nightclub, more so a hedonistic paradise, in New York City in the 70s. Along with its infamous balcony, restrictive dress code, and open club drug use, Studio 54 had celebrity guest lists with the likes of Andy Warhol, Cher, Freddie Mercury, and David Bowie.

Read this next: These vintage Studio 54 photos make us want to party like it's 1977

Michael Kors' costly collection includes an oversized puffer coat and crushed silk blouse brandishing the Studio 54 logo, flared pants and a metallic trench coat. For Interview, André Leon Talley, legendary fashion designer and long-time editor for Vogue, spoke with Kors about his Studio 54 days. Kors explained his experiences in the club: "everyone was having in the balcony... a lot of people were so high on quaaludes that you would see them fall down the stairs and go directly onto the dance floor..."

Read this next: Studio 54 founder: "I never saw Donald Trump dance... he was a serious guy."

However, Ian Schrager went to Instagram to debunk this myth stating, "I don’t believe Michael Kors was ever at Studio 54. I certainly don’t remember him as he made no impression. This is nothing more than an obvious exploitation by a garment center person to sell some clothes that has nothing to do with Studio or what it was about."

Kors stood by his statement explaining that the club was an eclectic mix of people, and as a high school student at the time, he never met Schrager himself.

“Everyone was having in the balcony. The most shocking thing, when you think about it, is that a lot of people were so high on quaaludes that you would see them fall down the stairs and go directly onto the dance floor, and not even consider that they had just fallen down two flights of steps. People were rubber.” Fashion royalty @michaelkors and @andreltalley reminisce about their wild nights at Studio 54, the inspiration for Kors’s latest collection. Photographed by @alessioboniphoto for our 50th Anniversary Issue, on stands soon. 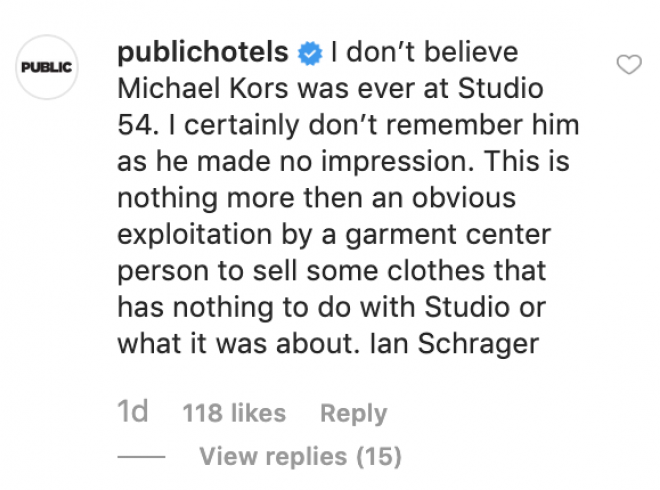