“If you write drum & bass for the money, you're a fucking idiot,” claims Tom Green. Better known as Shogun Warrior, Rockwell, Green may speak bluntly but he's right to do so — and besides, his heart is in the right place. Never a particularly popular genre in the mainstream — too fast for some, too underground for the rest — drum & bass has only really emerged as a profitable venture since its recent adoption by pop (raising yet another argument of what actually counts as drum & bass).

“We're living post-Rudimental,” says the Londoner, suggesting the scene has developed a yearning for No.1 status. “But I'm not really trying to define my career or my success or my happiness by numbers of sales, or numbers on Twitter, or numbers on Facebook. If I've finished a tune, I'm fucking happy. I couldn't give two shits if no-one else likes it or no-one else buys it.”

This may seem a rather reckless attitude to take, but it speaks volumes of Green's rekindled drive for artistic freedom. Back in 2009, when he made his first impact on the drum & bass world with a nifty little roller called 'Underpass', Green's punk-like creativity and knack for precise execution was exactly what the scene needed, and following a series of inspired records for the likes of Critical and Darkestral, he was quickly snapped up by Friction on an exclusive deal with Shogun Audio.

Since then, however, Green's sound has transitioned into something far more 'all-guns-blazing' than 'precision-bomber'; a change he blames largely on his increased involvement with the festival circuit. “It's a difficult thing to do when you're DJing, to come home and switch off from your weekend's gigs and be completely subjective in the studio.

It's difficult to turn off from that,” Green tells DJ Mag. “If you're going out every weekend doing these massive gigs and you're seeing DJs smash the arse out of a venue with big tunes, that's gonna rub off on you.” 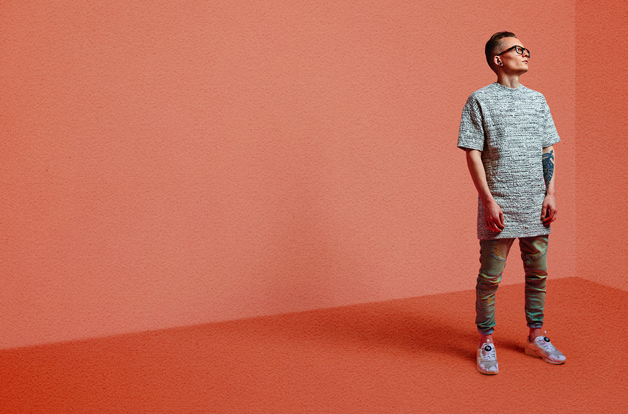 Green feels his work during this period was designed to please the crowds, rather than himself, and it's through the desire to fix this issue that his debut album, 'Obsolete Medium', was born.

With certain aspects — such as a Jams F Kennedy's vocal on 'Guts/Blood/Sex/Drugs' — dating back well over two years, the album isn't an entirely new effort, and it isn't a complete departure from Green's other recent work either. Instead, 'Obselete Medium' presents a slightly tongue-in-cheek take on the dance album concept, even down to the name itself, as Green explains: “It's a bit of a stab at myself, because I'm writing an album in 2015, when to be perfectly honest, I would probably have been better if I just split everything up into four EPs and banged one on Bandcamp every two months.”

Comprised of 15 tracks, the album serves as more of a comment on the state of the scene, adapting many of the over-the-top elements of popular dance and showing how they can still be effective without a flowery headband and an MDMA-glaze. Nowhere is this more obvious than lead track, 'Please Please Please (Play This On The Radio)'. Satirising the drum & bass scene's newfound need for public approval, Green combines a catchy hardcore riff with what he himself refers to as “quite inacessible” sounds, including a four-minute techno-inspired intro. At almost seven-minutes in total, Green admits both label and management were sceptical at first; however, he stuck to his guns and the track has been receiving more airtime than any of his previous work.

“It just reinforced to me that you don't have to bend over backwards to get played on the radio or to get certain DJs to play you,” says Green, describing his frustration at the typical release framework of pop A-side, underground B-side. “I just don't know who these records are being written for,” he continues. “I think people should just have a bit more faith in good music, because there's no recipe to get a chart tune or a playlist tune or a radio tune. There's no 'if you use this drum and this bass and this vocal, you're gonna get a radio tune'. It doesn't work like that. I think people should just concentrate on writing decent music rather than trying to tick boxes.”

According to Green, avoiding the charts has benefits other than being creative too. “I don't want to be DJing to loads of 14-year-old girls every weekend,” he jokes. “Imagine how boring that would get after six months. You would have a nice car, but would that make you happy? I don't think it would.”