Motion Trap is back with an irresistibly danceable cover of Maggie Rogers’ “Alaska!” Motion Trap has been creating synthesized soundscapes, electronic explorations and sexy hooks for over six years now. In 2017 the duo released Heavenly Bodies, an EP packed to the brim with utterly addictive synth pop that slaps. Kyle Williams and Nathan Rogers — the men behind the motion — debuted a new single called “N2U” earlier this summer that’s seen smashing success even landing a premiere with This Song is Sick. 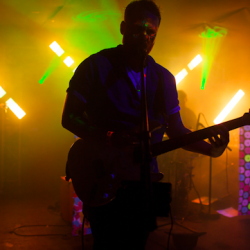 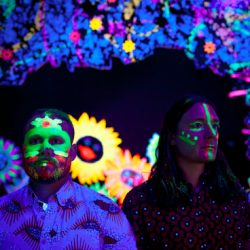 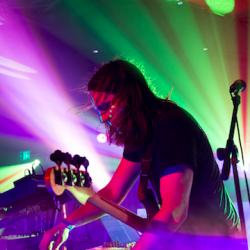 This release is a part of 303 Magazine’s ongoing cover challenge series with Colorado musicians that also highlights local venues. The independent Denver publication presented Motion Trap with a list of songs to choose from — all purposely challenging in their own ways — and the duo decided on pop sensation Maggie Rogers.

“We chose ‘Alaska’ because it’s not a sound we have done in the past,” said Kyle Williams of the band. “We wanted to take a song that didn’t necessarily sound like Motion Trap and explore how we could make it one of ours. The performance on the Maggie Rogers version is absolutely amazing and we wanted to try to reimagine it while keeping its magic.”

The team collaborated with Denver’s International Church of Cannabis for the filming location. Adding visual direction to the already unique venue, Adam Multcher brought his BEYOND experience, projection mapping into the mix with psychedelic visuals. When paired with Motion Trap’s catchy cover, it’s a video you’ll probably want to watch more than once. This weekend you can find Motion Trap putting on an intimate event in a secret location in Denver and September 6th at Ofelia’s. For more on Motion Trap, follow them below. Before you go also enjoy Motion Trap’s music video for their single ‘Youth Blood’.