, has joined forces with Lisbon-based visual artist Vhils to curate a brand new exhibition inspired by the symbol he holds most dear, the smiley.

The new exhibition, which Cook has named Smile High Club, will open on June 21 at Underdogs Gallery in Lisbon, Portugal. Spending over 40 years building up what very well might be the most extensive collection of smiley face memorabilia and art in the world, Cook is taking his extensive collection of objects and putting on display for the public to see.

“The only thing that isn’t for sale in the exhibition is my smiley collection," Cook tells. "In it is everything from a motorcycle helmet to condoms, to a toaster, portable ashtrays, slippers, cuff links, lighters – basically anything you can stick a smiley on.”

An international symbol of peace, love and happiness, the smiley face has always been closely tied to rave culture

and Cook adopted it as his unofficial Fatboy Slim logo and mantra: "Smile or die."

“I became aware of the smiley in 1977 on the cover of the first 12’’ single, Psycho Killer by the Talking Heads," says Cook while explaining the significance of the smiley in his life. "Once on my radar, I loved how such a simple image appeared in so many unexpected places in popular culture, both historically and thematically. As I grew up through punk rock into club culture, it endured in my experience and imagination. Born in the sixties and growing up in the seventies, it has followed me around all my life so it was no surprise to later learn that the smiley was born in 1963, the exact year I came into the world.”

In addition to Cook's happy ephemera, the show will present 11 artists who have created works that pay homage to the smiley's creator, James Ball, and touch on the impact this iconic image has had on popular culture. 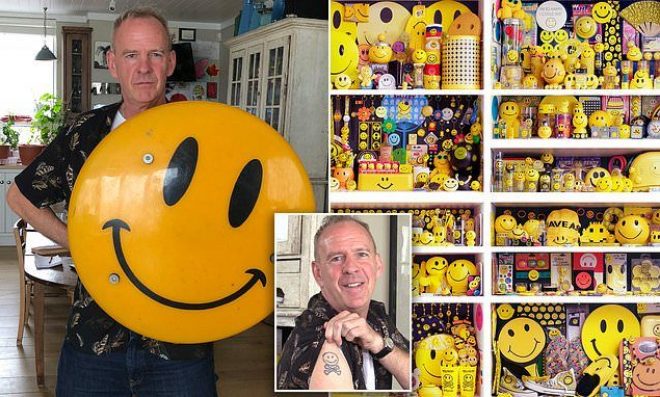