After hinting at new events to come in his exclusive interview on On Rotation back in January, Gary Richards (aka Destructo) revealed the news that he would be launching a brand new festival cruise which he's cheekily christened FRIENDSHIP this coming December. Today, the sold-out inaugural dance music voyage has revealed its formidable line-up.

The stellar talent invited aboard this new tropical excursion includes RÜFÜS DU SOL, Boys Noize, Peggy Gou, Busy P, Dixon, DJ Tennis, Jackmaster, Moon Boots, Madam X, Josh Wink, Claptone, 2manyDJs and many more. In addition to this, FRIENDSHIP has announced that the festival's guest of honor, who will be aboard for its maiden voyage, is no other than revered electronic music pioneer Giorgio Moroder.

The four-night event, presented by AMFAMFAMF, sets sail in Miami on December 11 and will travel through the Bahamas before returning to South Beach on December 15. FRIENDSHIP's vessel, the Celebrity Equinox, is a premium luxury cruise ship fitted with 13 bars and lounges, a spa club, fitness centers and a variety of dining venues.

Enter for your chance to win a cabin aboard FRIENDSHIP here 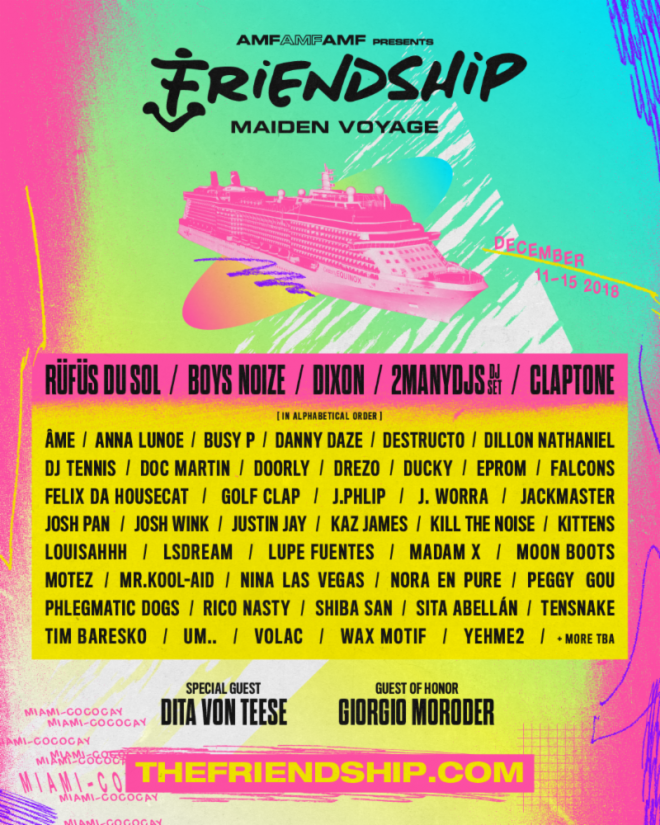