ARC Music Festival is set to take place at Union Park in Chicago, the birthplace of the house music with lineup that does not disappoint.

The festival’s lineup additions boast some of the moments most in demand dance music talent. ARC’s complete lineup includes a DJ set by Channel Tres. Having recently collaborated with the likes of Tyler the Creator, Tinashe, VanJess and more – he’s bound to have some impressive tricks up his sleeve for such a monumental debut festival. Attendees also have the pleasure of seeing artists such as Camelphat, Bob Moses, Meduza, Will Clarke and Zhu. 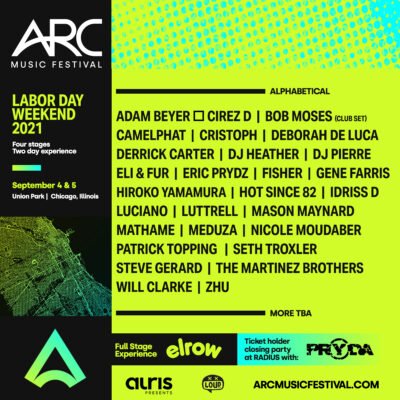 What may be the most notable appearance is Eric Prydz. ARC Festival will be the only to host all 3 of his unique alias’ in a single weekend. Attendees will also be treated to festival sets from Eric’s namesake identity, the US festival debut of Cirez D alongside Drumcode legend Adam Beyer, as well as his progressive house alias Pryda for a sold out closing party at RADIUS available for purchase by festival-goers only.

Resident DJ’s of the area will have a unique experiencing playing on a school bus that has been converted into a fully functional mobile stage. Powered by The GoodBus, the ARC car stage will boast 10,000 watts of sound.

Chicago seems to have a knack for creating music experiences that speak to fans on even a global scale. From niche genres to big named artists, there seems to be something for everyone. ARC Music Festival will be a monumental weekend for House Music fans to enjoy an international lineup of some of the genres best productions.

General tickets and VIP packages are on sale now at ARCmusicfestival.com