Coming July 31st, Absolut and elrow will be co-hosting a brand-new festival set to pop off with headliners like Detroit-Techno / Chicago-house head Seth Troxler, smooth London-based DJ and curator Gideön, along with a DJ set from Hot Chip, who just released their newest album, A Bath Full of Ecstasy. These headliners will also be joined in this exclusive Spanish locale by Heidi, Horse Meat Disco, Beating Heart Collective, Ion Pananides, Raw Silk, and Alex Potts in what promoters are calling, The Gardenarium.

The Gardenarium festival promises to push the limits of guests’ expectations with new concepts and treats for all the senses. 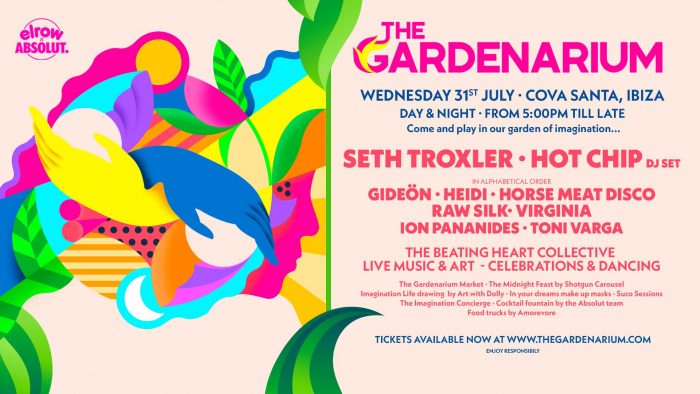 A place with no borders, no limits – just endless possibilities! Where the fountains get you tipsy, the flowers come to life, candy floss tastes of cheese and nothing is quite as it seems.

The acts are said to perform adjacent to a host of creative presentations and experiences. With elrow’s past reputation as an experienced party-starting company, activities will also include “Imagination Exploration” workshops hosted by the Ibiza-based collective, Cosmic Pineapple as they celebrate the cornerstones of humanity and imagination.

In honor of this upcoming music destination, check out these five tracks below to meet some of the headliners set to ring in the celebration.

While they may be shaking up things with a DJ set, Hot Chip recently released this smooth and classic house banger for their aforementioned full-length album. Skirting through an 8 minute visual Odyssey, Hot Chip used the song as a backdrop for a storied, tumultuous narrative reminiscent of indie dance.

For the past few years, Seth Troxler focused much of his energy on producing other projects and presenting himself as a live DJ, but the classic “CZ” shows minimalist Chicago-infused house and a keen ear for balance. This Gardenium headliner will bring this sense of eclectic music-knowledge to the stage like he’s known for.

Straight from the Beating Heart Collective, Luke Vibert brings this exclusive track called “Africable” to the dancefloor with a clever clapline and africana vocalizations; in 2019, diversifying your sound is the way to go, and “Africable” should fill your need for obscure sounds to the western ear.

Beginning with a number of obscure sounds, Ibiza residents Ion Pananides use smooth beats to skirt over ambient chords. “The New Era” adds a New Age vibe to the deceptively complicated structure of the track.